Dome - Beyond the norm 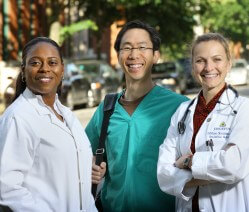 Ginette Hinds, left, Timothy Wang and Colleen Christmas made an unusual house call to help a patient when a hospital visit was too risky.

It is a reality at Hopkins Medicine that one’s everyday duties should meet the high standards for which the institution is generally known. But every so often, an event occurs or opportunity arises that prompts staff to respond to an even greater level—making that human connection that inspires the hope and trust patients see in Hopkins Medicine. Here are two such recent examples.

This past Christmas Eve, when most people were doing last-minute holiday shopping or gathering with family, three physicians took the extraordinary step of going to an elderly man’s home to perform surgery on a tumor.

Earlier that week, the patient had fallen and fractured his leg on the same day that he had an appointment with a Johns Hopkins Bayview dermatologist for a painful growth on his ear. An ambulance took him to Bayview, where doctors set his leg in a cast and performed a biopsy on the ear mass, which proved to be cancerous and required prompt removal by a plastic surgeon.

Colleen Christmas, the patient’s internist, feared that his venturing out again in such a frail state was too risky. She discussed the situation with dermatologist Ginette Hinds, who recommended that they go to the man’s home to try to remove at least some of the skin cancer. In preparation for the visit, Hinds called dermatologic surgeon Tim Wang for advice, given the circumstances. Wang, instead of just advising, insisted on joining them.

Early the next evening, the three doctors set out for the patient’s home. There, as Christmas held a flashlight and Hinds assisted, Wang performed the bedside resection, which, he says, went without a hitch, noting that the patient and his daughter were “incredibly grateful.”

“Never,” says Christmas, “have I been more proud of the collaborative and innovative spirit here than I was that night.”

January 24 started out as a regular, busy Monday at the office of Drs. Mayer, Hogan and Associates, a Johns Hopkins Medicine community obstetrics and gynecology practice on the campus of Howard County General Hospital. Medical assistants Natalia Rudyk and Zeliea Branch were at the front desk waiting for a patient when a woman burst into the office saying someone had collapsed in the elevator. “We were thinking it was probably one of our expectant patients, because we’re used to them getting woozy or passing out,” says Rudyk.

But, when Rudyk, Branch and patient service coordinator Jeanine Pitts got to the elevator, they found an older man collapsed in the corner. As Pitts held the door open, Branch and Rudyk tried to rouse the man, who was quickly turning blue, and discovered he had no pulse.

Right behind them came gynecologist William Mayer and nurse Bonnie King, along with anesthesiologist Mark Matsunaga, director of the hospital’s Comprehensive Pain Center. Quickly, the three began CPR and even tried the automatic external defibrillator, all to no avail. When paramedics arrived, they transported the still unresponsive patient to the Emergency Department.

Although the patient survived this initial incident, unfortunately, he later died. But, the teamwork of the professionals who responded to him is being regarded around the Howard County General campus as heroic. “It certainly wasn’t what we expected,” says Rudyk, “but our instincts just took over and we all worked well as a team to help the patient.”