Dome - The drive to learn

The drive to learn 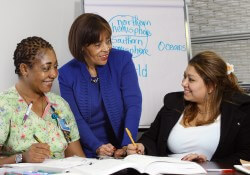 Coach/instructor Jean Chase (center) helps guide the at-work studies of employee-students like Ana Trejo (left), who wants to be a surgical tech, and Hanifa Nakayiwa, who is heading into nursing.

When Ana Trejo walked down the aisle of Suburban Hospital’s auditorium to the strains of “Pomp and Circumstance” one evening last October, not only did the graduation ceremony represent the culmination of almost a year’s worth of intense at-work curriculum, it also allowed her three young daughters—ages 12, 7 and 5—to witness firsthand the importance of education as a way to advance in the workplace.

“My daughters got to see me work my way to a very important goal. They were so proud,” says Trejo, a Suburban Hospital housekeeping employee.

School at Work is geared toward entry-level workers in the health care industry and combines career-specific education and planning. After passing a reading exam for eligibility, students participate in two 4-month sessions and attend classes for two hours a week during workdays. Developed by Catalyst Learning Company, the workplace learning tool is used in more than 400 hospitals nationwide.

Suburban first became involved with the School at Work program in 2004, when Catalyst approached Nancy Lentz, corporate director of education and development, about participating in what was then a pilot program funded by the U.S. Department of Education.

Seven years and 73 graduates later, the program is still going strong. Forty percent of its graduates have been promoted at the hospital and 58 percent have taken college courses. Some have earned associate’s degrees or are on their way to earning bachelor’s degrees.

Although federal funding ended after the first year, Suburban executives were impressed with the results and decided to continue running the program using hospital funds. “We couldn’t believe the excitement that the program generated in just one year,” says Jacky Schultz, Suburban’s senior vice president of clinical operations and chief nursing officer. “The first class of SAW students was recruiting the next group before they even graduated.”

After the first year, it also was apparent that a professional educator was needed, so Jean Chase, a Ph.D. and retired Montgomery County teacher, was contracted not only to teach the School at Work curriculum but also to help prepare employees for the program by leading the Suburban Hospital Prep School program. Prep School offers basic reading, writing and math skills, and English as a second language classes, all onsite during work hours.

The time commitment that participants must make isn’t for the faint at heart. In addition to class time, students spend two to three hours per week studying. They don’t have to go it alone, however. Chase readily gives out her home phone number and e-mail address and fields questions about homework until late in the evening and on the weekends.

Just as important as the employees’ determination is the department managers’ commitment to their staff’s involvement in the program. Neal Harris, Suburban’s director of Environmental Services, has had members of his team in the last three graduating classes. “It’s not always easy balancing schedules when two or three members of my department are in the program at one time,” said Harris, “but the sacrifice is worth it for the participants and for me, as their manager.”

Stella Cotton, a credentialing coordinator and a fall 2010 graduate, echoes how important that support and encouragement from manager and colleagues were to her. “My family couldn’t travel from Texas to be at my School at Work graduation, but my Suburban Hospital ‘family’ was there, and that really meant a lot to me.”