After nearly 30 years, Levi Watkins Jr. still believes in the healing power of celebrating the life of his slain mentor. 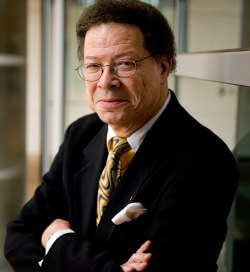 Levi Watkins has spent a lifetime putting into practice the lessons he learned as a young teenager from Dr. Martin Luther King Jr. And, each January for 29 years, he has shared his mentor’s virtues and wisdom with Hopkins and the community.

As a teen living in segregated Montgomery, Ala., Levi Watkins Jr. and fellow members of the Crusaders, his church youth group, met nearly every Sunday with an unassuming and funny young man who had a way of rendering their simmering rage into purposeful action. That young man, Dr. Martin Luther King Jr., had come to Montgomery in 1954 as the newly minted pastor of Dexter Avenue Baptist Church, spiritual home to the Watkins family.

King’s nonviolent strategies would soon force the world to bear witness to the injustices of racism. In the meantime, it was the great fortune of Watkins and his peers to be schooled by a man who would go on to change the course of history.

Watkins had become a distinguished faculty member in the school of medicine when in 1982 he launched the Martin Luther King Jr. Commemoration in honor of his slain mentor. The initial audience of 50 or so employees quickly grew in ensuing years, along with the event’s reputation for rousing music and notable speakers, including Coretta Scott King, Maya Angelou and Stevie Wonder. Nearly three decades later, the celebration is a beloved tradition that fills Turner Auditorium to the brim every January.

Intentionally, the commemoration marks progress and acknowledges the work that remains before true racial equality can be achieved. “I think the commemoration resonates because it points out issues concerning race without ostracizing and cutting anybody’s head off,” says Watkins, an associate dean and professor of cardiac surgery. “People leave uplifted emotionally. They’re entertained with the music. And they’re glad to see all of us come together in harmony and love.

Teachings for a lifetime

Persisting in the face of immense obstacles is a fine art perfected by Watkins over the years, thanks to his former pastor’s lifelong lessons. As Montgomery became the roiling heart of the civil rights movement under King’s leadership, Watkins and his friends lived by the man’s immediate example, staying in school and practicing nonviolence. The lessons served Watkins well as the first African-American student admitted to the Vanderbilt School of Medicine, where initially he was the target of bigotry.

“When we let freedom ring, when we let it ring from every tenement and every hamlet, from every state and every city, we will be able to speed up that day when all of God’s children, black men and white men, Jews and Gentiles, Protestants and Catholics, will be able to join hands and sing in the words of the old spiritual, ‘Free at last, free at last. Thank God Almighty, we are free at last.’”
“I Have a Dream” speech, Aug. 28, 1963

King’s principles later gave shape to Watkins’ work at Hopkins Hospital, where he arrived in 1970 as a surgical intern shortly after it had become integrated. At the time, Hopkins still bore an unfortunate resemblance to Montgomery, Watkins once reflected in a published interview. The separate wards, blood banks, morgues and cafeterias for blacks and whites were no more, but racism still hovered over the institution. Undaunted, Watkins became the institution’s first black chief resident in cardiac surgery in 1978. He also blazed a trail as the first surgeon to implant an automatic defibrillator in 1980.

“Levi Watkins is a civil rights hero by virtue of his experience growing up, his personal example at Vanderbilt and Johns Hopkins, and his determination to pass on a legacy through the Martin Luther King Commemoration,” says David Nichols, vice dean for education

The list of historic “firsts” racked up by Watkins wasn’t the point of his mission, he often notes; rather, it highlighted what he considered to be the real point—that Hopkins wasn’t doing enough to correct old wrongs. With King’s words ringing in his head, Watkins joined the school of medicine’s admissions committee and single-handedly recruited qualified black candidates. By 1983, the school’s minority enrollment had multiplied by 400 percent. Just as important was the welfare of rank-and-file employees, says Watkins, who initiated the King commemoration with the aim of fostering “diversity at all levels” of the institution.

“Man must evolve for all human conflict a method which rejects revenge, aggression and retaliation. The foundation of such a method is love.”
Martin Luther King Jr., Nobel Prize acceptance speech, Stockholm, Sweden, Dec. 1, 1964

U.S. Rep. John Lewis, another renowned figure of the civil rights movement, praises Watkins’ medical accomplishments and enduring commitment to human rights. “In Alabama as a young man, Levi Watkins participated in the Montgomery bus boycott,” says Lewis, also a boycott veteran and speaker at the 2001 King celebration. “He is touched by the spirit of truth and is a person of great conscience. Dr. Watkins never forgot his roots nor has he forgotten those of us who walked alongside him in the past.”

The challenge to remember

Each year, the Turner stage is barely cleared from the King commemoration activities before Watkins is approached by staff, students and faculty who want to know the name of the next year’s speaker.

To himself, Watkins likely says, That’s a good question.

Increasingly, the crammed itineraries of keynote prospects force Watkins and his committee to invite at least two speakers and hope that at least one will accept. Last year, planners held out remote hope for invited guests Barack Obama or Michele Obama. It’s a good thing that they also invited the eventual speaker, Lou Gossett Jr., as the president and the first lady declined.

With the passing of many King colleagues and Watkins’ exhaustion of the list of friends he could tap, his annual task has become all the more challenging. And then there are the celebrities demanding large speaking fees, which has “somewhat limited the pipeline,” Watkins says. “It’s disappointing because a lot of people are where they are because of Dr. King’s work. You just keep on pushing.”

“I have a dream that one day this nation will rise up and live out the true meaning of its creed: ‘We hold these truths to be self-evident: that all men are created equal.’ I have a dream that one day on the red hills of Georgia the sons of former slaves and the sons of former slave owners will be able to sit down together at a table of brotherhood.”
“I Have a Dream,” Aug. 28, 1963

American autobiographer and poet Maya Angelou, who spoke at the 2007 MLK event, noted that Watkins has “generously shared his sense of social concern with the Civil Rights Movement.  He has helped us to realize what it means to be a great American: to take responsibility for the time we take up and the space we occupy.”

Far beyond Hopkins, Watkins has also continued his campaign for a world where all people receive the respect, opportunities and human rights they are entitled to. In a recent address at the Gladstone Institute of Virology and Immunology, he referred to health care disparities between whites and people of color—what King regarded as “the most shocking and inhumane” of all injustices. Watkins reminded those in the packed lecture hall that those disparities remain, citing a set of “embarrassing and disgraceful” statistics.

Watkins is “a stalwart in the storm,” says Kweisi Mfume, a featured speaker at the commemoration in 1997, former U.S. Rep. and past president of the National Association for the Advancement of Colored People. Now CEO of the National Medical Association, which represents African-American physicians and their patients, the Baltimore-born Mfume applauds Watkins for his perseverance.

“Through the simple eloquence of his example, he reminds us that the test of compassion is not just a matter of having come a long way, but realizing there is yet still yet a long way to go. Like an African griot he has woven a thread of history and hope with each MLK commemoration. He is and continues to be our drum major for justice."

“I’ve seen the promised land. I may not get there with you. But I want you to know tonight, that we, as a people, will get to the promised land. And I’m happy, tonight. I’m not worried about anything. I’m not fearing any man. Mine eyes have seen the glory of the coming of the Lord.”
“I’ve Been to the Mountaintop,” April 3, 1968

The drum major has enlisted timely backup for this year’s program, Shirley Sherrod and Regina Benjamin (see sidebar), lauding them as “two daughters of the South” who share his journey and vision. Their remarks will help set the standard in the year ahead for straightforward conversations about race and health care.

But King’s faithful student doesn’t want to just talk about inequality. “I hope that both Shirley and Regina can talk about progress as well,” Watkins says. “Racial ugliness sometimes sets us back a step or two, but as Martin Luther King Jr. used to say, ‘The arc of the moral universe is long, but it bends toward justice’.”