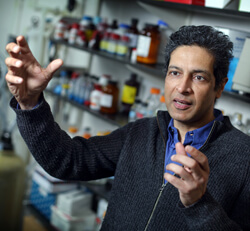 Working with mice and human blood and liver samples, Johns Hopkins Children’s Center investigators have identified a previously unsuspected liver hormone as a critical player in the development of type 2 diabetes, a condition that affects nearly 26 million people in the United States and is a leading cause of heart disease and stroke, as well as kidney, nerve and eye damage.

The study shows that the hormone kisspeptin 1, or K1—up until now known for its regulation of puberty and fertility—also slows down the production of insulin, the sugar-regulating hormone secreted by the pancreas, and in doing so fuels the development of type 2 diabetes.

The findings, published in the journal Cell Metabolism, provide what researchers consider a missing link in understanding the origins of type 2 diabetes. Two hormones, glucagon and insulin, must work in synchrony to maintain healthy sugar levels in the bloodstream. Secreted when sugar levels drop, glucagon causes the liver to release its strategic reserves of glucose into the bloodstream. Insulin acts as an antidote to glucagon and helps the body lower blood sugar by transporting it out of the bloodstream and into organs and tissues as fuel. In type 2 diabetes, pancreatic cells secrete too little or no insulin at all, leading to a dangerous buildup of sugar in the blood.

The prevailing wisdom has been that exposure to chronically elevated glucagon and blood sugar levels takes a gradual toll on the pancreas, and its overworked beta cells slowly decrease insulin output until they stop making insulin altogether.

The new findings, however, show that the pancreatic cells don’t just get tired; their function is directly suppressed by K1.

“Our findings suggest that glucagon issues the command, but K1 carries out the orders, and in doing so, it appears to be the very cause of the declining insulin secretion seen in type 2 diabetes,” says lead investigator Mehboob Hussain, an endocrinologist and metabolism expert at the Children’s Center.

The identification of K1 as a key player in diabetes offers a possible new treatment target that could lead to the development of drugs that restore the function of the insulin-secreting cells. Currently, diabetes therapy is based on injecting synthetic insulin to maintain blood sugar levels. However, restoring natural insulin production could, in theory, cure diabetes, instead of simply mitigating its symptoms.

The Johns Hopkins team says it has already identified a hormonelike substance that blocks the K1 receptor in the pancreatic cells of mice. The investigators will next study whether this receptor-blocker can restore the function of human pancreatic cells.