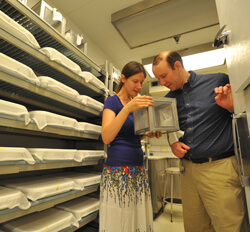 1 2
Researchers Christopher Potter and Olena Riabinina of the Johns Hopkins University School of Medicine will study sensory activity in mosquito brains with help from researchers at the Malaria Research Institute in the Bloomberg School of Public Health. Thanks to the new Discovery Fund Synergy Awards, Potter and Riabinina are among 16 research teams to cross disciplines in hopes of unveiling novel insights about human disease and biology.
Photo by Mike Ciesielski

Peering through a microscope in a lab at the Bloomberg School of Public Health, Olena Riabinina dissects a female mosquito with a pair of tiny forceps. Floating in a clear fluid that prevents cell death, the insect’s severed head—namely, its brain—may hold fresh promise in the fight against malaria, a mosquito-borne disease that kills nearly 1 million people a year.

In the past, Riabinina, a postdoctoral researcher in the Center for Sensory Biology at the Johns Hopkins University School of Medicine, may never have set foot in the Malaria Research Institute lab. Based in neuroscientist Christopher Potter’s lab, Riabinina typically studies fruit flies, while Malaria Research Institute investigators in the school of public health focus on mosquitos.

The new Discovery Fund Synergy Awards, however, have allowed 16 research teams, including Potter’s, to cross boundaries that have traditionally separated research labs and disciplines across Johns Hopkins.

Thanks to an initiative of the newly formed Johns Hopkins Medicine Research Council, each 12-month grant provides approximately $100,000 toward multidisciplinary research projects led by school of medicine faculty, paving the way for otherwise unlikely breakthroughs in human disease and biology. The annual awards chart an innovative new direction for research while also fulfilling a goal of the Johns Hopkins Medicine Strategic Plan’s commitment to biomedical discovery.

Investigators “can make a quantum jump if they work with somebody who has complementary skills,” says Antony Rosen, the school of medicine’s vice dean for research. But in an era of shrinking research dollars, the financial incentive to collaborate across disciplines has to be there, he says. “The only reason to reach out naturally is if it is in their interest to do so. Grants are an extraordinary incentive.”

In its experimental spirit, the awards encourage researchers to take chances they might not otherwise consider. “This really gives you an opportunity to dream and try something new,” Rosen says. “Some of the ideas are going to be amazing and right, others will be partly right and others will be plain wrong.”

In July, Potter’s proposal, submitted in concert with Marcelo Jacobs-Lorena of the Malaria Research Institute, was selected from among 174 applications as one of 16 to receive an inaugural award. The proposal—to view sensory activity in the mosquito brain—lays the groundwork for a new field of basic research that targets the mosquito’s response to smells, heat and other stimuli. “We’re not going to get rid of mosquitos,” Potter says. “But we can try to get them to stop biting us.”

Potter and Riabinina will visually monitor neuronal activity in mosquito brains with genetic tools Potter developed to study the fruit fly’s sense of smell, including a method for mapping olfactory neurons in fruit flies that have been genetically modified to glow when exposed to light. He anticipates that the same tools can be used to reveal the process by which the female mosquito integrates sense of smell and the ability to detect carbon dioxide and human body temperatures to find its next blood meal.

“There must be something going on inside the mosquito brain that puts all of this information together to say, ‘Human here,’” says Potter of the species’ females, which transmit the malaria parasite when feeding on humans and other vertebrates to get the necessary protein for laying their eggs. (Male mosquitos don’t bite, sticking instead to flower nectar.)

By mapping these particular neurons, “We will be able to see for the first time how different senses are detected by the mosquito brain,” Potter says. “For example, it is currently unknown how mosquitos detect temperature. We might be able to examine directly which neurons are activated when a warm source is brought close to the mosquito head.” Once the sensory process has been pinpointed, investigators can begin to figure out how to turn off the mosquito’s penchant for human blood, Potter says.

Jacobs-Lorena’s lab offers a rich resource of technical expertise for Potter’s research team. In its quest to halt the growth of the malaria parasite in the mosquito’s gut, his lab continues to refine the painstaking process of breeding genetically modified, or transgenic, mosquitos. For Potter’s imaging project, the lab will breed and tend to mosquitos that carry the same artificial gene that the neuroscientist devised to observe sensory activity in fruit flies. “Our work is very complementary,” Jacobs-Lorena says. “Chris is an expert in neurobiology, and we are experts in engineering mosquitos.”

He sees the collaboration with Potter’s lab as a model for all future scientific exploration. “These days, no lab dominates in all technology, and progress can only be made by cooperation by one lab helping the other.”

Once Potter acquires a critical mass of transgenic mosquitos from Jacobs-Lorena’s lab, the project will return to the Department of Neuroscience and the Center for Sensory Biology. There, his team will examine the insect’s response to stimuli under a two-photon microscope, an exceptionally powerful instrument that can peer deep into the brain.

Potter predicts that scientists around the world will adapt the tools developed through his collaboration with Jacobs-Lorena for their own research purposes. “We’re on the frontier now of making transgenic mosquitos,” he says. “It’s getting easier and easier. We’ll soon see a lot more imaging of the brain that couldn’t have been done before.”

Read more about the strategic priority for biomedical discovery online at hopkinsmedicine.org/strategic_plan.

The school of medicine is pleased to announce the recipients of the Discovery Fund Synergy Awards. These awards are designed to spark new, synergistic interactions between investigators and potentiate scientific achievements of the highest quality and impact. The following projects were awarded in the range of $100,000 each.