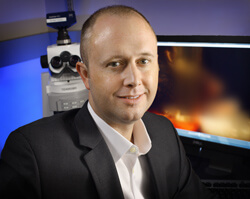 Chances are someone you know or love has suffered a stroke. Considered a medical emergency, it’s the fourth-leading cause of death in the United States and the main cause of chronic adult disability. Stroke occurs when a vessel in the brain ruptures or is suddenly blocked by a blood clot, depriving brain tissue of oxygen. Within minutes, thousands of neurons die, potentially impairing brain function, movement and speech, and leading to a sensation patients describe as “being locked inside your head.” In some cases, a drug called tissue plasminogen activator (tPA), delivered within a few hours of the stroke, can bust the clot and help restore blood flow to prevent further damage.

The good news, says Victor Urrutia, director of The Johns Hopkins Hospital’s Comprehensive Stroke Center, is that 80 percent of the time, strokes are preventable. Managing risk factors like high blood pressure, smoking, obesity and high cholesterol, along with increasing physical activity, can avert a crisis. And the stroke center has been at the forefront in educating patients about these risks (see sidebar).

But when a stroke strikes, what can be done to raise the odds of a better outcome?

Early drug interventions and rapid efforts to encourage recovery of function can make all the difference, says Urrutia. Still, it’s a race against time, and Johns Hopkins neurology researcher Steven Zeiler says that despite all the approved therapies, stroke patients will likely end up with deficits, like slurred speech and diminished use of an arm and leg. With improved acute care, he notes, most patients are surviving. But that’s small comfort for the many—as high as 60 percent—who struggle with walking or end up in long-term-care facilities.

Now, says Zeiler, there’s new hope. In a recent study, he and his colleagues found an area of the brain that reorganizes following a stroke. They discovered that mice can recover from debilitating strokes that damage the primary motor cortex—the region of the brain that controls most body movement—if the rodents are quickly subjected to physical conditioning that quickly “rewires” a different part of the brain to take over lost function.

In the study, the researchers trained normal but hungry mice to reach for food pellets in a way that avoided spilling them, then rewarded the mice with the pellets. Though the task was daunting, say the researchers, the mice achieved maximum accuracy after about a week. The scientists then induced small strokes that caused damage to the rodents’ primary motor cortex.

As expected, the reaching and grasping precision disappeared, but a week of retraining—begun just 48 hours after the stroke—led the mice to again successfully perform the task nearly as well as they had before the stroke. The researchers tested the mice again, inducing strokes in which the pellet-grabbing skills were lost. Once again the mice could be retrained.

Later brain studies showed that although many nerve cells in the primary motor cortex were permanently damaged by the stroke, a different part of the brain, called the medial premotor cortex, adopted a new functional ability to aid in pellet reaching. In this case, says Zeiler, that portion of the brain seemed to take over the reach-and-grab task function. “This tells us that retraining after stroke does something to reorganize the brain.”

Another key finding in the mice, post-stroke, was a reduction in the level of parvalbumin, a protein that marks the presence of inhibitory neurons that keep brain circuits from overloading. “We continue to better characterize the nuances and timing of the retraining and pharmacological interventions,” says Zeiler.

The research underscores that damaged neurons can be trained to recover through mechanisms that could be applied to people with acute stroke, says Justin McArthur, director of the Department of Neurology.

As for those left with deficits, Zeiler says, “We have been asking how we can encourage the rest of the nervous system to adapt to allow true recovery. This research begins to provide us some answers.” The take-home message, he says, is that prompt treatment following stroke remains critical.

The Skinny on Strokes

Recognize the Symptoms
Sudden onset of:

·       numbness or weakness on one side of your body or face