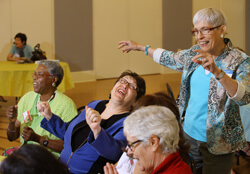 Marti Bailey, right, shares a laugh with Club Memory patients as they reminisce.

When Dick Gill, 72, was diagnosed with dementia four years ago, his world changed. He reluctantly retired from his job developing computer systems and programs, a serious blow for a man who “got his identity from his work,” in the words of his wife, Elizabeth.

Yet the Gills have found new friends and routines through Club Memory, a group led by its founder Marti Bailey, director of the Sibley Senior Association and Community Health at Sibley Memorial Hospital.

Designed for participants with early dementia or mild cognitive impairment, Club Memory started with 10 people last year. Now, membership is about 70, and 40 or so come to each event. The group meets every other Wednesday in a large, sunny room at the Metropolitan Memorial United Methodist Church in Washington, D.C., not far from Sibley Memorial Hospital. It is free to members of the Sibley Senior Association and their companions/caregivers.

“Isolation is the enemy of our brain,” Bailey says. “Anything we can do to make us think is a good thing.”

The director, who worked previously at Sunrise Senior Living in Washington, took charge of the 7,000-member Sibley Senior Association in 2011. Members, who must be 50 or older, pay a one-time fee of $40 to access programs including yoga classes, health screenings, day trips and bereavement support.

At Club Memory, participants spend two hours playing games, singing songs, chatting and enjoying coffee and snacks. “It’s really fantastic,” Gill says. “One of my big pet peeves was people talking about me in the third person. This is a peer group of people who are in the same situation, and we happen to have a good time.”

He adds: “The Sibley people, they have exactly the right tone. They don’t make it their show.”

Bailey’s warmth and easy laugh draw others to her. One afternoon she sits with about 10 men and women at a round table, chatting and singing. At one point, she launches into an enthusiastic rendition of “My Favorite Things.” But instead of singing every word, she starts the phrases, then lets the others at the table finish. “Raindrops,” she sings, and the men and women at the table chime in: “On roses.” “Bright copper,” she continues, and the group adds: “kettles.”

The idea is to give participants a little fun and some positive reinforcement, she says. The songs are sometimes accompanied by the piano-playing of Karen Rowe, who was diagnosed in October 2012 with primary progressive aphasia, which impairs her ability to communicate. “I meet friends here,” says Rowe, 72, who attends the club with her wife, Olivia Gray. “We have this group of people that we can get to know because of the bond we share,” Gray says.

Memory Clubs (sometimes called Memory Cafes) are “a fairly new concept,” says Bailey. The first of these casual social groups started in the Netherlands in 1997, flourished in England and now number roughly 80 in the United States, according to the Alzheimer’s Association. Club Memory, launched in 2012, was the first in the D.C. region. Another club in Vienna, Va., was recently started by a couple who used to travel to the Sibley group, Bailey says. She hopes to foster more locations, particularly in underserved areas.

“The vision for me is to continue to listen,” she says. “I take the comments of what members say very seriously. Listen and respond are kind of my bywords.”

While Club Memory stands out as one of Bailey’s most ambitious programs for seniors, it is far from the only one she has launched at Sibley. She has started foreign-language conversation clubs, new support groups, and a “laugh cafe,” which meets once a month for lunch and joke-telling. Some years ago, she says she left a career in business to “follow her heart” into a more gratifying field: providing support to the growing number of aging Americans.

“At the end of the day, I get to go home extremely satisfied,” she says. “It’s an extraordinary job and I couldn’t be happier to be part of it.”