Dome - A Daily Call for Safety

A Daily Call for Safety 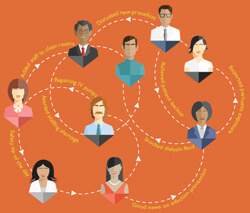 At 9 a.m. sharp, at least 80 department representatives from across All Children’s Hospital jump on a 15-minute conference call. One by one, they report safety concerns to hospital and satellite clinic colleagues on the line. A handful of problems come to light, including potential staffing shortages on a number of inpatient floors, a prescription glitch in home care and an expired drip in an intensive care unit.

Before participants unmute their phones for follow-up questions, the meeting concludes with the safety tip of the day; today, it’s a reminder for employees to review hospital guidelines for preventing exposure to pertussis, which has been on the rise.

Once, safety problems at All Children’s rarely concerned those beyond the clinical setting where they occurred. Since the launch of the daily call, however, the risks, no matter their origin, are made known to clinical and nonclinical leaders hospitalwide, ensuring a collective understanding of the day’s safety issues and goals.

“Safety is everybody’s business now,” says All Children’s Chief Safety Officer Brigitta Mueller, who introduced the daily operational call in January. “It’s not about simply having a department in charge of safety.”

In cultivating a united front against harm, All Children’s joins the scores of hospitals across the country that have embraced a daily call as a vital tool for improving overall safety. A safety model borrowed from the nuclear power industry, the daily call addresses recent, present and potential risks to patients, employees and visitors. Within Johns Hopkins Medicine, the daily call—also referred to as a huddle, briefing or check-in—takes place at Sibley Memorial, Suburban and Howard County General hospitals as well.

Although the briefing format varies according to each hospital’s size and needs—Howard County General participants generally attend the meeting in person rather than call in, for example—open communication is the shared goal. “The call really brings together the whole organization at one time during the day just to know what is brewing,” Mueller says.

Occasionally, problems are resolved during or immediately after the call. When the All Children’s emergency department reported a staffing shortage for one shift, the pediatric intensive care unit manager offered to lend two nurses to fill the empty slots.

Many unexpected patient safety problems that occurred in the past are now avoided thanks to the call, Mueller says. A shortage of dialysis fluid used in continuous renal replacement therapy once caught the hospital by surprise, for instance, but it’s unlikely to recur. “Now that the number of kids on dialysis and the quantity of reserve fluid is reported out in the daily meeting, the entire supply chain is involved in keeping the fluid in stock,” Mueller says.

Since March 31, daily briefings have been taking place at Howard County General with the participation of patient safety manager Joe Dwyer. At each briefing, 40 groups report in quick succession by assigning green, yellow and red status to a stated problem, according to the level of severity.

No problem is left to fester. “When a safety concern arises, somebody takes responsibility for resolving it before we move on to the next topic,” Dwyer says. With the participation of employees across departments and disciplines, once-intractable problems can now be fixed, he says.

At Sibley Memorial, typical daily huddle topics may include “a new type of surgery, a very compromised patient arriving for a special procedure or notification that a piece of equipment is going down for inspection for a few hours,” says Chief Operating Officer Sanjay Saha. And with all hospital managers in one room, he adds, it’s easier to find ways to prevent problems before they happen.