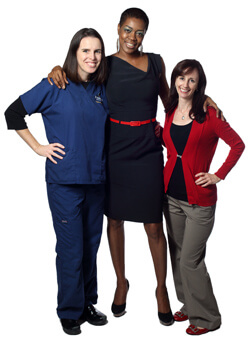 During the holidays, people gather together to celebrate family, friends and milestones they’re most grateful for. Meanwhile, the spirit of thanksgiving is alive and well at work, too. In keeping with the season, we decided to investigate thankfulness at The Johns Hopkins Hospital by asking the following question:

At work this year, who are you most grateful for? Tell us why.

We began with Trina Isaac, a patient financial services supervisor who is also a patient at the hospital. Her answer led us to oncology nurse Joanne Harkness, whose own answer sent us on to senior oncology nurse Pierse Byrnes. Byrnes, in turn, singled out a patient who taught her an invaluable lesson.

Although Isaac, Harkness and Byrnes know one another from interactions in Weinberg’s outpatient chemotherapy unit, the women did not realize they also formed links in an invisible chain of gratitude. What follows is the story behind their thanks.

“Joanne has made my cancer so much easier to bear.”

In 2012, Trina Isaac was bent on improving her fitness when she took up running and healthy eating. Within days, however, the patient financial services supervisor at Johns Hopkins at Keswick had developed severe diarrhea and decided to seek medical care. She discovered that, at 38, she had a deadly form of colorectal cancer that required surgery, chemo and radiation.

Immediately after hearing the news, Isaac recalls wiping her tear-soaked glasses as she sat beside her husband in their car outside her doctor’s office. “Finally, I looked at him and said, ‘OK, we’re going to beat this. I’m not going to let this change who I am. I have cancer; it doesn’t have me.’ I told him I was determined to live every day to the fullest—without losing my sense of humor.”

A self-described jokester, Isaac was about to meet her match: Hopkins chemo nurse Joanne Harkness. “When I first met Joanne,” says Isaac, “I discovered that she had my kind of personality—lighthearted and quirky. She also could see that I was determined and very stubborn.”

Nearly two years since her treatment began, Isaac continues to arrive for her chemotherapy sessions dressed “to the nines” in high heels. And Harkness teases her incessantly about her “shoe fetish”: Isaac proudly admits that she owns about 100 pairs of stilettos.

One day when Isaac arrived in flip-flops, she recalls Harkness glared at her. “‘Where did you get those shoes?’ she asked me. ‘Don’t you ever wear those here again!’”

“I appreciate that Joanne and I can talk to each other about anything—kids, clothes, makeup,” says Isaac. More importantly, she relies on Harkness to tell her exactly what to expect from the treatments. “And she never rushes.”

Though Isaac has experienced formidable setbacks, she recently heard good news after a crucial appointment: No tumors were visible in her abdomen. She immediately dashed off to share the news with Harkness. “Though I still have a long road ahead,” she says, “Joanne has made my cancer so much easier to bear.”

“Pierse always makes sure I know how to handle situations.”

Before becoming an outpatient oncology nurse so that she could spend more time with her children, Joanne Harkness worked on an inpatient hematology/oncology unit. Making the switch was less
difficult, she says, because of senior oncology nurse Pierse Byrnes, who has given her the confidence to treat the most medically complex patients.

Harkness remembers the apprehension she felt on a day with a lot of complicated patients and few nurses, a day she was scheduled to stay late. One patient who had experienced a serious reaction to chemo earlier needed to be monitored in case she reacted badly to another prescribed medication that was about to be delivered. As Byrnes was putting on her coat to go home, recalls Harkness, she realized how anxious her colleague was. “She stayed until 9 p.m. that night to help guide me and never complained about it.”

Byrnes, who’s finishing up a nurse practitioner program in December, has been known to stay late on many occasions. “She’s the busiest person I know,” says Harkness, “yet she makes time for everyone and ensures that patients are safe. Pierse has a breadth of knowledge about cancer treatment. She always makes sure I know how to handle situations.”

“He opened me up enough to express my deepest gratitude for having had him as my patient.”

Pierse Byrnes treats some of the sickest oncology patients in the outpatient unit. Yet, despite their poor prognoses, she says she’s always astonished at how happy, talkative and grateful most are. One recent experience raised her appreciation to new heights.

A middle-aged man she’d treated over the course of five years learned that he was not responding to treatment for advanced head and neck cancer. “He had such dignity and grace,” Byrnes says, “and always said he felt fine.” He’d ask about her own plans, applauding her decision to seek further training. “I know you’re going to do great in nurse practitioner school,” he’d tell her.

When the gentlemanly patient came back to the unit in June, he looked pale and weak. He was about to go on hospice care, he said, and wanted to thank the staff for their care. Though Byrnes says she doesn’t allow herself to cry in front of patients, this time she let the tears flow.

“The hardest part about our job is that you worry about getting too involved with patients,” she says. “You develop a shell around you. It takes a patient like him to make you realize that he is truly part of your life. I felt like I was saying goodbye to an old friend.”

That moment of mutual understanding taught her that showing vulnerability can be a gift. “He opened me up enough to express my deepest gratitude for having had him as my patient,” she says. “It felt good to cry.”

At work this year, who are most grateful to? Tell us why.