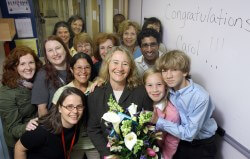 Nobel laureate Carol Greider with her children, Gwendolyn Comfort, 9, and Charles Comfort, 13, and jubilant research team and colleagues, including Mary Armanios, farthest back, who made an important clinical connection based on Greider’s telomere work.

Last month, when Carol Greider won the Nobel Prize in Physiology or Medicine, she called the award “a boost for fundamental, curiosity-driven science.” It was also a measure of her fortitude, given that she has struggled with dyslexia all her life.

In 1984—at age 23— Greider, the Daniel Nathans Professor and Director of Molecular Biology and Genetics, co-discovered the enzyme telomerase, which protects chromosome ends (telomeres). But back then, as a grad student at UC Berkeley, she and her colleagues had no idea of the discovery’s medical relevance.

“We were just trying to understand how chromosomes behave,” says Greider. “If you don’t understand how cells normally function, then you can’t find out what goes on in cancer cells.” It wasn’t until 1990 that researchers discovered that telomerase plays a major role in cancer growth. Not long afterward, they also found a connection to diseases related to aging.

In cancer, where cells reproduce rampantly, tumors produce higher levels of telomerase, allowing cells to grow. In other diseases, telomeres shorten (their protective plastic-like tips unravel) because of a lack of telomerase. Patients with too little of the enzyme can’t maintain the production of stem cells in bone marrow and other tissues.

The hope, says Greider, is to find a way to regulate the production of telomerase. Biotech companies are eager to use that knowledge to develop drugs that control the enzyme.

Greider, 48, is one of only 10 women to win a Nobel in Physiology or Medicine and the third youngest person to have received one in the prize’s 108-year history. She credits  another woman, her mentor, Elizabeth Blackburn, of the University of California San Francisco—who shares this year’s Nobel (as does their colleague Jack Szostak, of Harvard University)—for encouraging her to probe molecular biology. At the same time, says Greider, by example, Blackburn taught Greider how to be a good mentor: “to listen to people and to address their own problems rather than imposing—to let students make their own discoveries.”

That approach proved transformative for Greider, who always struggled with reading and pronouncing words. To this day, Greider wrestles with dyslexia, though for years, she didn’t know her learning disability had a name.

“You learn to overcome it,” says Greider, whose son also has dyslexia. “For me, it was a problem of self-esteem because I was put in with all the kids who needed remedial help. But I liked reading. Once I read more, it got easier.”

Still, spelling and sounding out words remained difficult, so Greider relied on her photographic memory. She got A-plusses in anatomy and chemistry, but standardized tests always tripped her up. Her GRE scores fell short—only two of the 10 universities she applied to accepted her. Greider calls dyslexia a different way of viewing the world. “Sometimes,” she says, “it’s an advantage.”

Hopkins oncologist Mary Armanios, who trained in Greider’s lab, recalls that from the outset, the Nobel laureate explained the details of the telomere using accessible terms and pencil and paper to map everything out. Armanios doesn’t attribute Greider’s novel insights to dyslexia. Rather, she says, “I think it’s this idea of needing to work a little bit harder at everything you do.”

Drawing from her work with Greider, Armanios was able to make a human connection to a patient’s situation, which resulted in a critical finding about idiopathic pulmonary fibrosis (see sidebar, page 1).

Robert Brodsky, director of Hematology, says he can’t think of a more worthy recipient of the Nobel. “Carol’s work is transformative,” he says, “because it opens up so many areas of research.” And, like Armanios, Brodsky admires Greider’s unassuming ways: “She carries herself with confidence about her research, but she’s very easygoing.”

Awards like the Lasker (which Greider won in 2006) and the Nobel, says Greider, are “a testament to investing in people who have clever ideas that might not seem directly applicable to diseases but become apparent later on.”

The Royal Swedish Academy of Sciences will bestow the $1.4 million prize, diploma and medal on Greider, Blackburn and Szostak at a ceremony in Stockholm on Dec. 10. At that time, Greider will become the 20th of those with ties to the School of Medicine—the 33rd of those with ties to the University—to have received what is considered the most prestigious award in the world.