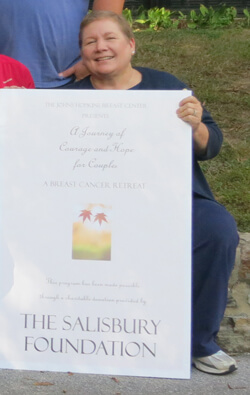 Funding for the Johns Hopkins Metastatic Breast Cancer Couples Retreat has been generously provided by The Salisbury Family Foundation since its inception in 2008.

Dealing with the sudden death of a loved one—be it a child, spouse, parent or grandparent—can be emotionally draining, but perhaps not as much as dealing with a loved one’s lingering, inevitably fatal, illness.

This became clear to Lillie Shockney, administrative director of both the Johns Hopkins Breast Center and Cancer Survivorship Programs, when she began receiving inquiries from women with terminal, metastatic breast cancer. Confronting the end of their lives, they wanted help coping with what the future might hold.

For more than a decade, Johns Hopkins has provided retreats for breast cancer survivors, supporting their efforts to “transform” themselves from feeling like patients to getting on with their lives, Shockney says.  A nurse and university distinguished service associate professor of breast cancer, she realized that those who would never cease being patients needed help coming to grips with the end of their lives, as did their spouses or caregivers.

In 2006, Shockney launched the Metastatic Breast Cancer Retreat, believed to be the only one of its kind in the nation, to address those needs. Held twice a year at the Sisters of Bon Secours’ Retreat and Conference Center in Marriottsville, Md., the retreats have served 59 individual patients, 36 spouses and 21 female caregivers so far.

One retreat is for couples, while the other is for women who are not in a relationship but bring a female caregiver—a mother, sister, daughter or best friend—with them. Assisted by Judy Matthews, a member of the Breast Center survivors volunteer team; Debby Stewart and Mary Capano, two of the center’s breast cancer nurse navigators as well as breast cancer survivors; and Rhonda Cooper, the Sydney Kimmel Comprehensive Cancer Center’s chaplain, the two-and-a-half-day, two-night retreats offer participants the opportunity “to speak candidly with others in the same situation they have,” says Shockney. Some discussions are separated by gender. “I think the men-only group is one of the most powerful things that we do,” Shockney says.

The free retreats are also available to patients outside of Johns Hopkins. Over the past six months, Shockney has used a grant from the Avon Foundation to create a planning guide for metastatic cancer retreat programs so that other cancer centers may develop their own.

She’s also eager to expand the scope of these retreats. Late in 2012, the colorectal cancer group at Hopkins held its first such retreat, she says, and the pancreatic cancer team is preparing to hold its first this year. “We are hoping head-and-neck will follow, as well as gynecologic oncology,” Shockney adds.

A 20-year breast cancer survivor herself and administrator of Johns Hopkins’ Breast Center since 1997, Shockney says the metastatic cancer couples’ retreat “is probably the most profound thing I’ve ever done.”

A video about the retreat, filmed on location and featuring recent participants and Shockney, can be seen at http://www.youtube.com/watch?v=Bg02G2a7uHo.