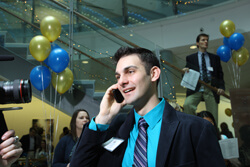 John Zampella, shown here on Match Day—the day when fourth-year medical students find out where they will perform their residencies—says the Genes to Society curriculum helps provide medical students earlier contact with patients and does a good job of preparing them for clinical rotations.

John Zampella remembers the first time that he interviewed a patient as a Johns Hopkins medical student. “She was being treated for chronic myelogenous leukemia,” Zampella recalls. “It was awkward because when you’re just starting out, you don’t know what questions are important to ask. It takes practice to become comfortable.”

That first encounter, part of a clinical skills course, was especially memorable to Zampella because the patient had received a new, targeted drug that gave her an excellent prognosis for a cure. “We had just learned about that drug, so meeting the patient who had taken it was a great correlation.”

With its new Genes to Society curriculum, launched in 2009, Johns Hopkins School of Medicine students get more practice with their clinical interviewing skills. Hopkins medical students now begin speaking with patients in the first week of medical school, rather than waiting until their second year.

That’s only one of the many changes introduced by Genes to Society. There is now a greater emphasis throughout the curriculum to consider socioeconomic, lifestyle and genetic factors that influence a patient’s health and ability to adhere to a treatment plan.

Matthew Huddle, of the class of 2013, says, “When I first came to medical school, I didn’t realize how important societal determinants are to understanding a patient’s health and developing a treatment plan.”

This year’s graduating class of 115 students earning a medical degree is the first to have completed all four years of the Genes to Society curriculum, which includes courses on health care disparities, patient safety and palliative care. Topics such as ethics, population health and the structure of health care systems have also been woven throughout the curriculum. Also, there is more focus on learning about substance abuse and pain management.

“They added some really important features, such as transitional courses to prepare us for hospital-based clerkships, and sessions between semesters to learn about the societal aspects of medicine, such as helping patients with end-of-life care and navigating the health care system,” says Zampella, who plans to go into dermatology and will begin a residency at The Johns Hopkins Hospital later this summer.

Genes to Society also streamlined the learning about different organ systems, such as the cardiovascular system, by integrating normal and abnormal anatomy, physiology and pathology into one course, rather than having the healthy and the diseased aspects of organ systems taught in separate courses given in different years.

“Our goal is to get the students to use a systems approach to understanding health and disease and be more collaborative and integrative in their thinking while gaining skills in problem-solving,” says Patricia Thomas, professor of medicine and associate dean for curriculum. “Also, by assigning a faculty member to each student to act as a mentor, we want to help strengthen their personal development as medical professionals.”

“Medical school has given me a broad perspective on the issues I’ll have to consider as a doctor,” says Matthew Huddle, who wants to become an otolaryngologist and will do his residency at Johns Hopkins. “I think we are well prepared, and the curriculum has given us the basic skills to succeed.”