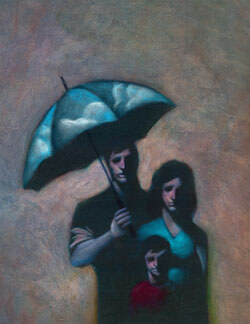 “I’m so tired,” Ann says while she and her husband walk into a hospital consulting room.

The Fullertons have spent a week at the bedside of their 15-month-old daughter, Emma. They’ve hardly left the pediatric intensive care unit (PICU) where Emma has been fighting a combination of life-threatening conditions. Her heart has been weakened by cardiomyopathy, diagnosed when she was 9 months old, and a recent bout of respiratory syncytial virus (RSV) required the insertion of a breathing tube.

Now, Emma’s condition appears to be improving. The breathing tube has been removed. The attending physicians and nurses tell the Fullertons to go home and rest.

Arpana Rayannavar, a second-year pediatric resident, urges them to take that advice. “I can keep you updated.”

Reassured, the Fullertons go home. But early the next morning, they receive a call to return to the hospital immediately. Emma’s condition has changed.

It becomes the agonizing duty of Rayannavar to tell the Fullertons that for reasons yet unknown, Emma stopped breathing. The resident recounts all of the unsuccessful efforts to revive her. Then, quietly, she says, “I’m sorry to tell you that Emma died.”

And so begins Rayannavar’s daunting half-hour encounter with two standardized patients (SPs)—actors who are trained to portray real patients or their family. The scenario above was conducted during the 17th annual Cameron Kravitt Foundation Grief and Bereavement Seminar.

Rayannavar was one of 27 pediatric residents and six chaplaincy residents participating in the daylong seminar in January. Since the program was founded, 410 pediatric and 36 chaplaincy residents at The Johns Hopkins Hospital have taken part in its grueling but enlightening interactions, which include discussions among themselves in small groups, presentations with actual parents whose children have died and explorations with experts on such subjects as how the world’s religions deal with death.

“It was tough,” Rayannavar said several days after the encounter with the SPs. “I felt as if I was talking to real parents about their child. I did not know what to expect, how they would react, which is often the case in real life.”

The experience helped prepare her for a real-life scenario that occurred only hours after the seminar. “I had to give bad news to parents over the phone that same night, and I applied the feedback [from fellow residents and the Kravitt seminar SPs] to that talk,” she said.

The grief and bereavement program is funded by Beverly and Jason Kravitt, an Illinois couple whose second child was delivered stillborn in a Chicago hospital in 1982. Jason Kravitt, an attorney and 1969 graduate of Johns Hopkins University’s School of Arts and Sciences, and his wife were devastated not only by the loss of their son—whom they had already named Cameron—but also by hospital staff who seemed incapable of helping them deal with their grief.

Divided into groups of five, each with a pediatric faculty mentor, residents gather in separate rooms of the simulation center. As each resident engages with SPs, the other four observe the encounter.

In addition to the scenario involving the Fullertons, a second standardized patient couple followed a script in which they found their 2-month-old infant son unresponsive in his crib, rushed him to the hospital, and later learned he was dead.

Some residents taking part in the seminar had dealt with the actual loss of patients in the PICU. For others, the training session was their first experience with such a difficult situation.

“Observing fellow residents actually makes these interactions more beneficial,” says resident Melissa Kwan. “Every reaction to bad news is different, and the next best thing to actually being in the middle of it is to be a very close observer.”

The seminar also showed how important it is for residents to deal with their own emotional trauma.

“You need to take care of yourself before you can take care of anyone else,” says Kwan. “Otherwise, you turn into a shell of a person.”