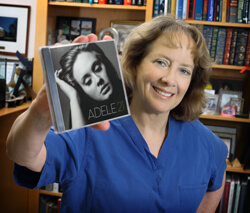 1 2 3
Julie Freischlag learned to appreciate Adele from her fellow in the OR, Brandon Propper.

Otolaryngologist Charles Limb, the only school of medicine faculty member who holds a joint appointment at the Peabody Conservatory, knows more than most physicians about the power of music.

A cochlear implant specialist, Limb has also tracked how jazz performers’ brains react while they’re improvising music. And he says the fact that many surgeons listen to music while operating makes considerable sense.

“For me, music in the operating room enhances the ambient environment so that I can concentrate better and also think more clearly. I think it’s particularly good for microsurgery, where intense focus on a tiny field is the nature of the task at hand.”

So what kind of music does Limb—a saxophonist and self-described “music addict”—prefer in the OR?

“In the morning, I often like Miles Davis—Kind of Blue [a 1959 album often called the greatest jazz album]—with something slightly more up-tempo as the day progresses.”

Researchers in the United States and Great Britain have sought to determine how many surgeons listen to music in the OR and what impact it has on them. A 1994 study in the Journal of the American Medical Association found that surgeons who listened to music of their own choosing had lower blood pressure and heart rate and other favorable physiological signs while performing complex mathematical exercises. A 2011 British study found that 90 percent of the surgeons there listened to music during their operations and believed it created a “harmonious and calm atmosphere” in the OR.

The musical selections of Johns Hopkins surgeons range from the contrapuntal complexities of Johann Sebastian Bach to the throbbing hard rock of AC/DC.

“The question as to what a Deadhead does when he’s done touring? Become a surgeon so the music never stops!” says Andrew Singer, a kidney and liver transplant expert and “a huge Grateful Dead fan.”

“A quiet, stressed room is no good, and it helps my inner happiness to be listening to good music ... It’s one of the reasons I like doing surgery. I get to listen to music all day.”

Not every Hopkins surgeon likes music playing while the scalpels flash. Duke Cameron, chief of cardiac surgery and an accomplished guitarist, used to listen to music—the British rock band Dire Straits reportedly was a favorite—but no longer.

“Though I love music and have it on almost constantly in my life, I forbid it in the OR,” Cameron says. “It interferes with communication and can distract people from important tasks. I think the situation is analogous to an airplane cockpit, where music is also forbidden for similar reasons.”

Luca Vricella, the Italian-born director of pediatric cardiac surgery and transplantation, respectfully disagrees. He prefers to listen to the classical baroque strains of Bach, Vivaldi and Albinoni as he performs some 250 surgeries annually.

“I mostly listen to ‘80s music in the operating room,” she says. “A lot of Michael Jackson and Madonna and all that sort of ‘80s pop stuff. It’s just totally mindless listening. I know all the songs, and it’s just sort of comforting.”

“The liver transplant operation requires a very high, sustained energy level,” the younger Cameron says. “To get that liver out, everybody’s got to be gunning the engine ... When we are moving toward reperfusion [the restoration of blood flow], which is a very tense, quiet portion of the operation, we may put on some mellow classic rock—maybe some Grateful Dead, maybe some Allman Brothers, maybe some Dave Matthews.”

The importance of music to surgeons was recognized when the operating rooms in the Sheikh Zayed Tower and The Charlotte R. Bloomberg Children’s Center were built.

In the old ORs, surgeons often supplied their own speakers, tape decks or CD players if they wanted music, notes Julie Freischlag, the director of surgery. “But now in the new ORs, we have a music system that’s attached to all the equipment, which is really great.” Four speakers, connected to an iPod docking station at the nurse’s desk, are installed in the ceiling of each OR, says Chris Smith, project executive at the Johns Hopkins Health System’s facilities design and construction office.

Although the surgeons usually have the final say on the music, most willingly compromise. Freischlag allows her fellow, Brandon Propper, to compile the playlist on his iPod. “He’ll bring in things from the ‘70s and ‘80s, so we’ll listen to Cat Stevens, Fleetwood Mac, all sorts of things like that. And he’ll bring in some newer things as well. That’s how I’ve learned to appreciate Adele.”

While transplant surgeon Singer is a fanatic Deadhead—often selecting Grateful Dead concert recordings as carefully as an oenophile chooses wine—he will also defer to the tastes of others. “For a while we made a disco playlist, which is very retro, but it was a crowd-pleaser. People would kind of peek into the operating room to see what the party was all about.”

Last year, Freischlag tested the theory that musicians and surgeons share a dedication to practice, precision and perfection. When she was interviewing candidates for general surgery residency, she discovered that almost 90 percent had once played an instrument. Then she asked them: “If you could be a musical instrument, what would you be and why?”

“We had a lot of drums,” Freischlag says. “Sort of drums-I-control-the-beat-I-make-everything-happen type of thing. That’s surgical-like.”