Dome - A Pillar of Faith and Strength

A Pillar of Faith and Strength 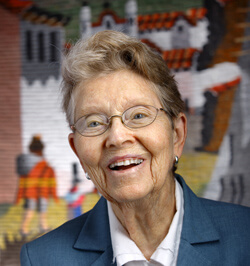 Sister Mary Ann Wood calls her years at Johns Hopkins Medicine International “a beautiful gift.” Her current plan is devote herself to her order, the School Sisters of Notre Dame, perhaps by visiting with retired sisters.

Sister Mary Ann Wood may stand less than 5 feet tall, but to her former co-workers and the hundreds of patients she helped, the octogenarian is a giant. She had already served a quarter-century as a missionary in the Bolivian Andes when she joined Johns Hopkins Medicine International in 1991 as one of its first international care coordinators.

Her role was created not just to provide medical interpretation for non-English-speaking patients, but to ease the journeys of international patients to Baltimore and throughout their medical visits. During her career at JHI in Baltimore, Sister Mary Ann trained dozens of employees and assisted hundreds of patients, most of whom she can recall by name.

When she decided the time had come to step down, her retirement ceremony in February overflowed with current and former JHI staff and even included two patients from El Salvador who joined the celebration in between their appointments. Realizing he’d be traveling at the time of the ceremony, Endocrine Division Director Paul Ladenson says he felt it was important to send a division representative in his stead.

“For more than 20 years, I’ve had the great pleasure of working with Sister Mary Ann in the care of Spanish-speaking patients,” Ladenson says. “She was always the epitome of compassionate professionalism, the caring face of Johns Hopkins for these patients. To be greeted by her in the hallway always brightened my day.”

Describing her as a role model and “an angel,” Sister Mary Ann’s co-workers say she is always positive, patient and empathetic. “You just feel peace when you are with her,” says international care coordinator Michael Hackshaw, a frequent attendee of the daily lunches over which Sister Mary Ann presided. These lunches began as a way for the Spanish-speaking staff to relax in their preferred language, but eventually were open to anyone—non-Spanish speakers and even non-JHI staff.

Perhaps international care coordinator supervisor Kim Miller, who oversaw Sister Mary Ann’s work, put it best: “I tell Sister, ‘When I grow up, I want to be like you.’”