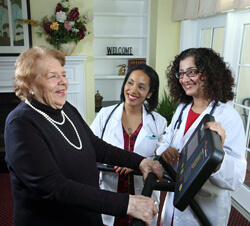 Soon after Dolores Nolan moved to Grand Oaks, an assisted living community that is part of Sibley Memorial Hospital, she found herself in and out of the emergency room with blood pressure fluctuations and swelling in her legs. She could barely cross her apartment with a walker—until the Johns Hopkins Memory and Care Program stepped in.

Nurse practitioner Beth Abate and geriatrician Kanwal Awan visited Nolan, now 88, to assess her health. Her son, Richard, told them that his mother seemed unusually confused and was spending a lot of time alone, an uncharacteristic situation for the formerly active woman who had worked as a public school librarian while raising her family.

Awan and Abate worked diligently with Nolan’s primary care physician to adjust her blood pressure medications. They also encouraged her to exercise. Now, a year later, Nolan has lost about 20 pounds and exercises twice a week on a bike and treadmill. Not only has she resumed walking and attending the music and craft programs at Grand Oaks, but she recently spent three weeks in San Francisco visiting her daughter and grandchildren.

“I can’t tell you how much Beth has done for me,” Nolan says. “She is readily available when I need her, and she has helped maintain my health, which has kept me out of the hospital.”

Count Nolan among the success stories for the 1½-year-old Johns Hopkins program at Grand Oaks. It consists of a Johns Hopkins nurse practitioner who works full time at the facility and a Johns Hopkins geriatrician and geropsychiatrist who each spend one day a week at the 172-apartment complex seeing and evaluating patients. The trio works together as consultants, developing care management plans for residents in partnership with their primary care providers, family caregivers and Grand Oaks staff, striving to improve residents’ health by pushing the benefits of healthy eating and exercise.

A joint venture of the Department of Psychiatry and Behavioral Sciences and the Division of Geriatric Medicine and Gerontology at Johns Hopkins Bayview Medical Center, the program is the first phase of a branded Johns Hopkins Medicine geriatrics program in the Washington metro area, says Tom Berlin, administrator for the division. Additional phases could involve a geriatrics/geropsychiatry outpatient practice for community residents 65 and older or the incorporation of telemedicine programs that could enable some patients to be seen remotely.

At Grand Oaks, geropsychiatrist Milap Nowrangi sees a full gamut of seniors, from those who “just want to know where they stand” mentally to others with more telltale signs of dementia or other behavioral concerns. He assesses residents’ needs, orders lab work or formal testing to assess brain functioning, if needed, and suggests treatments like behavior modification plans and medications.

“We hope to effect change throughout the facility to keep residents physically and mentally healthy,” Nowrangi says. “Our ultimate goal is to serve as a role model in an interdisciplinary care approach for other assisted living facilities.”

The Memory and Care Program reaches out to all new residents of Grand Oaks. Last fall, Awan spent nearly two hours meeting and giving physical examinations to 81-year-old Thomas Winans and his wife, Jane, 75. Jane had recently been hospitalized at Sibley for congestive heart failure. During the interview, which took place at the Winans’ kitchen table, Thomas reported that he had some weakness in his legs and trouble sleeping, despite taking prescription sleep aids.

Awan retrieved a plastic tub of 12 to 15 medicine bottles from the couple’s bedroom and examined them, asking about each medication and writing everything down to make sure it matched a list held by Grand Oaks. She recommended that Thomas begin exercising and establish a daily schedule, including setting times to go to sleep and wake up, to help with his insomnia.

Awan’s to-do list included updating medication lists in the couple’s records, following up with their cardiologist and internist, discussing her recommendations with their daughter, and referring Thomas to the geropsychiatrist to manage the prescription sleep medicines.

The 36-year-old physician says she was drawn to geriatrics during an internal medicine residency at the University of Pittsburgh in 2005. Coming from her native Pakistan, where the average life expectancy is 66, “I never saw such old patients,” she says. She went on to a geriatric medicine fellowship at Mount Sinai Hospital in New York before joining Johns Hopkins in 2011.

While medicine is rewarding, she says, geriatrics is even more so: “What I enjoy is the fact that patients are very complex and medically very challenging. It’s like having pieces of a puzzle you have to put together.”

Many residents at Grand Oaks have more than one health condition and take multiple over-the-counter or prescription medications. Some also take responsibility for spouses whose health is failing.

Abba Lichtenstein, a 92-year-old retired civil engineer, looks after his wife, Cecile, who has Alzheimer’s disease and lives in Oasis, a separate section of Grand Oaks that provides 24-hour care for patients with memory-related disorders. When Abba’s physician advised him to go to the hospital for urgent medical treatment, he was reluctant to leave his wife until he spoke with Abate. She accompanied him to the emergency room and also arranged for the Lichtensteins’ daughter to care for Cecile until Abba returned home three weeks later.

“Beth was very good—both for me and for Cecile,” he says. “Her help here is a blessing for all the patients.”

Abate says just spending time with the residents offers clues to what they need. “This is how I get my reward—seeing them happy,” she says. “You do as much as you can, the best you can, and be there for them.”

A CHAMPION FOR SENIORS’ HEALTH

The 172-unit assisted living community fosters the benefits of exercise, healthy eating and activities like puzzle solving to keep the mind active. Nelson is working with the on-site staff to enhance a wellness program for residents that already includes tai chi, walking, swimming, yoga and meditation—activities which research has shown can improve quality of life.