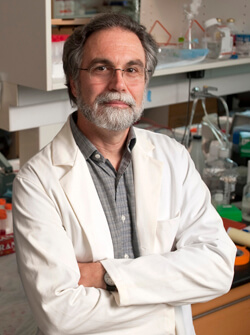 Gregg Semenza and his research team have found a way to block a protein that can cause relapse in patients with breast cancer.
Photo by Keith Weller

Triple-negative breast cancer, which accounts for about 20 percent of all breast cancers in the United States, is as bad as it sounds. The cells that form these tumors lack three proteins that would make the cancer respond to powerful, customized treatments.

Instead, doctors must turn to traditional chemotherapy drugs, which only show long-term effectiveness in 20 percent of women. In addition to being resistant to chemotherapy, these breast cancers are known to include a high number of breast cancer stem cells, which are responsible for relapses and for producing the metastatic tumors that lead to death.

Now, a research team led by Gregg Semenza of the Johns Hopkins Kimmel Cancer Center has discovered a way that breast cancer cells are able to resist the effects of chemotherapy. What’s more, the scientists have found a way to reverse that process. Their findings were published online in Proceedings of the National Academy of Sciences.

Previous research revealed that triple-negative breast cancer cells show a marked increase in the activity of many genes known to be controlled by the protein hypoxia-inducible factor (HIF). So the team decided to test whether HIF inhibitors could improve the effectiveness of chemotherapy.

“Our study showed that chemotherapy turns on HIF and that HIF enhances the survival of breast cancer stem cells, which are the cancer cells that must be killed to prevent relapse and metastasis,” says Semenza. “The good news is that we have drugs that block HIF from acting.”

Semenza notes that the HIF inhibitor digoxin is already approved by the Food and Drug Administration for treating heart failure. Several other drugs that inhibit HIF also have been identified and are currently being tested in patients with cancer. If the team’s work is verified in clinical trials, the researchers think that potentially unresponsive patients could be identified before treatment and given a more effective combination therapy.