Dome - The Art (and Science) of the Ask

The Art (and Science) of the Ask 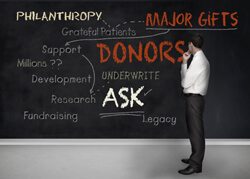 How do you ask for a million dollars? Steve Rum and the team at the Fund for Johns Hopkins Medicine do it all the time.

This summer, Rum and his team will launch a three-day philanthropy institute aimed at sharing “The Hopkins Way”—the fund’s successful approaches to “major gift” fundraising—with health care development professionals from around the country and the world. The summer institute is slated for Aug. 19 through Aug. 22.

Rum says the pitch is part science, part business and part art. “We’re talking about engaging both the head and the heart.”

The Johns Hopkins development philosophy integrates research-driven fundraising with the human side of medicine: the stories and personal connections that inspire and motivate generosity.

“We build on the concept of grateful patient fundraising,” Rum says. “We approach potential donors whose lives have been touched by our doctors or our researchers.”

Rum and his team often bring Johns Hopkins physicians on fundraising visits. Making sure to observe all patient privacy laws and to avoid any potential ethics issues, the gift officers never discuss patient illnesses. Instead, Rum says, physicians often describe opportunities, such as funding for new cancer research, that a donor’s gift could offer.

Making donors understand that Johns Hopkins Medicine values their support and commitment is key to successful fundraising, Rum says. “We are stewards of their generous donations,” he says. “Great gifts bring with them great responsibilities.”