Dome - A Partnership of Security

A Partnership of Security 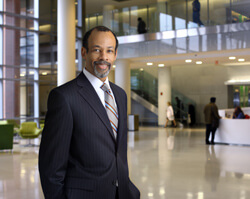 Keith Hill leads a corporate security team that numbers more than 1,000 people. On the East Baltimore campus, his team handles an average of more than 60,000 calls for assistance a year.

“Security is everyone’s responsibility,” he says. “With thousands of employees moving about the expansive East Baltimore campus day and night, it is virtually impossible for security to be everywhere all of the time.” Students and employees can help prevent crime by remembering to lock their offices and car doors and by securing valuables, he says.

The Department of Corporate Security, Parking and Transportation operates a security command center at the Homewood, Johns Hopkins Hospital, Johns Hopkins Bayview Medical Center and Howard County General Hospital campuses 24 hours a day, seven days a week. With more than 1,300 cameras keeping a watchful eye on the East Baltimore campus alone, Hill says that the department has been able to identify crimes in the making and to prevent them from occurring.

The department also provides a popular escort service; when requested, a Johns Hopkins security officer will walk patients, staff members and students to their cars or other on-campus locations.

The Johns Hopkins Security Office maintains daily contact with Baltimore City police, according to Steve Ward, a city police captain assigned to the Eastern District that includes much of The Johns Hopkins Hospital’s campus. Police often work closely with campus security and its investigative units to find and catch the perpetrators behind some of the thefts that occur, Ward says. Additionally, off-duty uniformed and plainclothes officers work on Johns Hopkins’ security force, and a uniformed police officer is assigned to the medical campus during the week.

Before joining Johns Hopkins, the head of security had a 25-year career in the United States Secret Service. The Baltimore native joined the agency responsible for the protection of the president and vice president of the United States in 1987 as a special agent in the Baltimore and New York field offices. He retired as the assistant director of the Office of Human Resources and Training in January 2013.

Hill’s work as an agent informs how he views his job. He believes in a preventive approach to crime, one that depends on increasing employee awareness of safety measures as well as on physical security strategies that could be used to protect a U.S. president or an emergency department staff member.

By working with stakeholders, both internally and externally, Hill says that Johns Hopkins remains a place where patients can receive excellent care and students can receive a stellar education, thanks to the efforts of more than 1,000 employees who make up the corporate security team.

“Our security team is ready to help our patients, staff and students while also acting as a deterrent to anyone looking to cause trouble,” he says. “Security is a partnership. Together we can provide a safe and secure environment for all.”

2. Always be aware of your surroundings, including unusual people, behavior and activity.

3. Traveling in pairs will reduce your chances of becoming the victim of a street crime.

4. Report any suspicious person or activity to Security as soon as possible.

5. If you become the victim of a robbery, don’t resist. Give up your property.