Dome - Getting Wise About Owls

Getting Wise About Owls 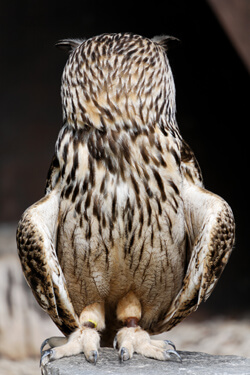 Who gives a hoot about owl anatomy? Johns Hopkins researchers, that’s who. They’ve uncovered some mysteries about these birds of prey, such as how they can rotate their heads 270 degrees on a horizontal axis and 180 degrees on the vertical without damaging delicate blood vessels in their necks or cutting off the blood supply to their brains.

A group of medical illustrators and neurological imaging experts at Johns Hopkins recently embarked on a research study to find out just why that is and to draw human parallels.

In what may be the first use of angiography, CT scans and medical illustrations to explore the anatomy of a dozen wide-eyed, night-hunting owls, the Hopkins team, led by medical illustrator Fabian de Kok-Mercado, found four major biological adaptations that prevent injury to the bird’s bone structure and vascular network needed to support its top-heavy head. The lack of such adaptations in humans could explain why they’re at higher risk for neck injury. The team’s findings were published in the Feb. 1 issue of the journal Science.

The researchers found through experiments with dye—used to mimic blood—that the arteries at the base of the owls’ heads temporarily expand as more fluid enters and before the fluid begins to pool. The researchers believe these reservoirs supply extra blood to the owls’ large heads and eyes during head rotations. Secondly, owl vertebrae have holes that are about 10 times larger in diameter than the vertebral artery traveling through them, creating a cushion of air that allows the artery to move easily when the head is twisted.

In addition, the team found that the owl’s vertebral artery enters the neck higher up than in other birds, allowing for more vessel room when the owl twists its head. Finally, owls have small blood vessel connections between the carotid and vertebral arteries that allow blood to be exchanged between the two. The researchers say these connections allow for continuous blood flow to the brain, even if one route becomes blocked.

“Until now,” says study senior investigator and interventional radiologist Philippe Gailloud, “brain imaging specialists like me, who deal with human injuries caused by trauma to arteries in the head and neck, have always been puzzled as to why rapid, twisting head movements did not leave thousands of owls lying dead on the forest floor from stroke.”

Carotid and vertebral arteries in the necks of most animals, including humans, are fragile, according to the study. And in humans, neck trauma, often from vehicular whiplash or overzealous chiropractic manipulations, can prove serious. Sudden twisting of the human head and neck, explains Gailloud, can stretch and tear blood vessel linings, producing clots.

Next up for study: hawk anatomy, to see if other bird species possess similar adaptive features.

Epic: Being There for Patients