The Department of Labor and Delivery's Naomi Cross is featured in a documentary celebrating American nurses. 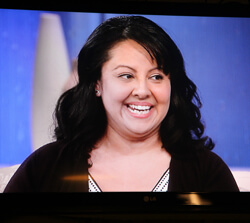 Naomi Cross has embraced her newfound celebrity to showcase nursing.

Although Naomi Cross had spent hours helping women deliver babies in front of a film crew, she recently found herself panicking as she waited for her first television interview.

The stakes were big: The Johns Hopkins Hospital labor and delivery nurse was appearing on Katie Couric’s talk show as part of a publicity campaign for the film The American Nurse: Healing America. She recalls how her anxiety built as she faced the famous television host, waiting for taping to begin. Sensing her guest’s unease, Couric leaned over. “It’s OK, Naomi,” she whispered. “Everyone in the audience is a nurse.”

“I felt better immediately,” Cross says. “Nurses are my people!”

The American Nurse demonstrates why. Sponsored by global pharmaceutical company Fresenius Kabi, the newly released film depicts the commitment and personal sacrifice of five nurses who work in a rural home hospice service, a nursing home, a prison, a service for wounded war veterans and the Johns Hopkins Birthing Center.

Viewers get a look into Cross’ home and family life, as well as her work with patients in the labor and delivery unit where she helps moms- and dads-to-be through difficult pregnancies, assisting grieving families when pregnancies are lost. In the film, Cross helps a pregnant woman who has lost an ovary to cancer deliver a healthy baby, a story she says demonstrates the “amazing success and amazing people in our unit.”

Filmmakers followed Cross—in and out of the hospital—for about a week in March 2013. Lisa Frank, a producer of The American Nurse, says it was important to have Johns Hopkins represented in the film. “We knew about the Hopkins reputation and the number-one hospital ranking,” she says. “And then, when we met Naomi, we knew she was a perfect fit for our movie.”

Directed by photographer and filmmaker Carolyn Jones, the documentary is part of The American Nurse Project, a multimedia effort to highlight the work of nurses across the country. In 2012, Jones and her team produced a coffee-table book as well as a website with video interviews of more than 100 nurses, including Cross and 19 of her colleagues from divisions across The Johns Hopkins Hospital.

The film can be seen across the nation at theaters owned by the Digital Cinema Destinations Corporation. For a listing of theaters and more information about the project, visit the website: americannurseproject.com.