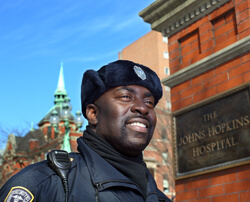 1 2
Despite the serious nature of his work, Anthony Walker is known for his friendliness and optimism.
photo by Keith Weller

At 6-foot-5, with a booming laugh and gregarious personality, security officer Anthony Walker is hard to miss as he patrols the Johns Hopkins Hospital campus. Raised in the small city of Orangeburg, South Carolina, he believes in greeting everybody he sees, and he’s generous with handshakes, hugs and banter. “My day is filled with meeting people from all over the world,” he says.

Walker, 45, has been on the Johns Hopkins beat for 10 years. In 2011, he started Man to Man: The Betty Walker Project, named for his mother, which holds motivational meetings several evenings a month for men working to overcome such obstacles as homelessness, addiction, post-traumatic stress disorder and unemployment.

“I tell them there is hope out there,” says Walker, the father of two sons in their 20s. “You can get an education, you can get a home, you can move on past your circumstances.”

About 30 people typically attend the meetings, sharing their stories and hearing from inspiring speakers such as pediatric orthopaedic surgeon Michael Ain. The Johns Hopkins physician overcame preconceptions and medical school rejections to prove that a man of 4-foot-3 could handle the physical demands of performing surgery.

“He was one of the best speakers, because he told how he never, ever gave up,” says Walker. “I think that touched all the men in the room.”

For his efforts, Walker received a 2014 Martin Luther King Jr. Community Service Award from Johns Hopkins. We tagged along with Walker one afternoon to learn a bit more about him.

Do you have a philosophy you bring to your job?

Being a Southern boy, I’ve heard all my life, “Be careful how you treat people.” The same person you treat badly one day could be the person who ends up helping you another day. Also, I don’t stereotype people. Some people may think patrol officers are low status, but Johns Hopkins has security officers who have written books, who have served in Afghanistan, who are former cops.

What was one of your most meaningful experiences?

About two years ago, I saw a woman crying while I was in the booth in front of the Weinberg Building. I said, “Ma’am, are you OK?” and she told me her husband had cancer. I asked if I could see him. It just became personal. I would always go up to see him, and when he died, I attended his funeral on the Eastern Shore. With this job, you’re more than a security officer. You’re a counselor. You’re a friend.

What is the biggest change you’ve seen?

Probably the biggest thing is increased neighborhood crime. These kids are so young. If they get in a fight and get injured or killed, they are brought to us. We’re right there when the doctor comes out and says this person is dead. Who’s going to console those mothers? The security officers.

It keeps me so humble. No matter what kind of bad day you’re having, it puts your life in perspective to meet the sick people who are here and the people who take care of them.