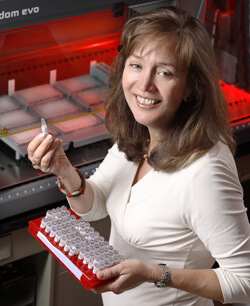 With a four-year, $9.5 million grant from the National Institutes of Health, Kathleen Barnes has recently completed full-genome sequencing of 1,005 individuals of African descent, half with asthma and half without. It’s a first step toward learning why African-Americans are disproportionately afflicted with the disease.

Her study is one example of how Johns Hopkins researchers are using “big data” in ways that have only recently become possible. “It could not have been done even five years ago, due to the prohibitive cost of the technology,” says Barnes, a genetic epidemiologist in clinical immunology and director of the Lowe Family Genomics Core and Genetics Facility. Barnes and her team are working with Illumina, the San Diego maker of “HiSeq” machines that have brought down the cost of obtaining a complete set of genetic information. Five years ago, each gene sequence would have cost around $10,000; now the price has dropped to around $3,000, Barnes says.

The sheer volume of the resulting data—130 terabytes, roughly the equivalent of 11 million phone books—is too large to transmit, so hard drives containing as many as a dozen sequences are regularly mailed from California to Baltimore, she says. The data is stored at the Data-Scope, a massive computer cluster stored in the School of Arts and Sciences’ Bloomberg Center for Physics and Astronomy, in a sign of collaboration across The Johns Hopkins University and Johns Hopkins Medicine, Barnes says.

The grant, awarded in November 2011, aims to fill an important information gap. Previous genetic research had focused on European populations, says Barnes, leaving her without the “right tools” for studying asthma in people with African ancestry, including those from the Caribbean and the Americas.

Barnes says her research has uncovered more than 49 million genetic variations that are specific to Africa-descended populations—“more than double what anyone anticipated,” she says. She is working to create a gene chip, a postage stamp-sized microarray that holds thousands of genes or gene fragments. Containing about 750,000 sequences that “best represent the African diaspora,” the chip will provide a reference point for researchers seeking mutations linked to asthma and other diseases.