Members of the Miller-Coulson Academy of Clinical Excellence embody the best in patient care. 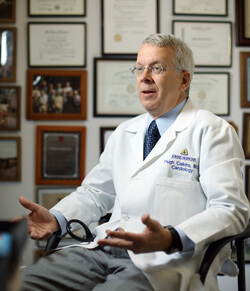 Until recently, Charlie Arnold was able to control his irregular heartbeat with medication. But now, he tells Johns Hopkins cardiologist Hugh Calkins, “It’s getting out of control.” He’s been hospitalized several times in the past six months with palpitations and dizziness so severe he feared he would pass out.

Arnold and his wife, Erika, have traveled from their Lewes, Delaware, home to see Calkins, pioneer of a procedure called catheter ablation and one of 11 physicians at The Johns Hopkins Hospital inducted this year into the Miller-Coulson Academy of Clinical Excellence. “I’m hoping with this surgery to get some of my life back,” says Arnold, 53, who is the pastor of Seaside Baptist Church, president of his own power-wash company and a volunteer firefighter.

His 57-year-old physician also has notable credentials. Calkins has written some 450 papers about heart irregularities and serves as president of the 6,000-member Heart Rhythm Society. He’s been a full professor at the Johns Hopkins University School of Medicine for more than a decade and directs the hospital’s arrhythmia service and electrophysiology laboratory.

Yet the academy’s membership ceremony, held in May, marks the first time Calkins has been evaluated and honored for the work that takes place in his small exam room and on his operating table. “Until now, there’s been no recognition [at The Johns Hopkins Hospital] for being an excellent clinician, other than that you get to keep your job,” he says.

The program to recognize clinical excellence began in 2006, when Sarah Miller Coulson and Frank Coulson donated $1 million to the Center for Innovative Medicine at Johns Hopkins Bayview Medical Center. The center’s director, rheumatologist David Hellmann, used the funding to answer a question posed by Sarah’s mother, Anne Miller, who wondered why Johns Hopkins did not have more physicians like the late Philip Tumulty, her internist. Tumulty, who helped found the Division of General Internal Medicine in 1977, was known for his caring, thoughtful interactions with patients.

The first step, says Hellmann, was creating a measurable definition of clinical excellence. The  process was led by Johns Hopkins Bayview internists Scott Wright and Steven Kravet, who is also president of Johns Hopkins Community Physicians, and geriatricians Colleen Christmas, director of the Internal Medicine Residency Program, and Chris Durso, director of the Division of Geriatric Medicine and Gerontology. The four took nearly three years to develop a standard, taking into account professionalism, communication skills, diagnostic prowess, depth of knowledge, ability to negotiate the health care system, “a passion for patient care” and service as a role model to medical trainees.

So far, just 32 people have been inducted into the academy. The first Miller-Coulson class was inducted in 2009, and until this year, nominations were limited to physicians from Johns Hopkins Bayview. The 2014 group was culled solely from The Johns Hopkins Hospital, says Wright, who now directs the program. Next year, he expects nominations to come from both campuses, and he envisions the academy growing to include physicians from Sibley Memorial Hospital, Suburban Hospital, Howard County General Hospital and All Children’s Hospital.

Expanding the academy is an important step toward evaluating and rewarding clinical excellence throughout Johns Hopkins Medicine, Wright says. “Currently, if faculty members spend two-thirds of their time in patient care, that doesn’t even get looked at or considered when they are up for promotion.”

This year, 11 of 20 applicants were accepted, says Wright. Like other inductees, Calkins needed four nominations just to begin the process. He wrote an essay about clinical excellence and submitted the names of 10 patients, 10 peers, 10 trainees and 10 staff members, all of whom filled out evaluations regarding his abilities. His professional reputation and productivity were also taken into account, and the information was evaluated by top-level clinicians from around the country in addition to a team from Johns Hopkins.

What It Means to Be a Member

Academy members write papers and give talks about clinical excellence. They also serve as role models for medical students who can sign up for week-long rotations within the academy “to see and learn the habits of a clinically excellent physician,” says Hellmann.

Calkins believes the key to high-quality clinical care is communicating well with patients, and he demonstrates this skill as he talks with Arnold, asking question after question about the Delaware man’s medications, symptoms, family health history and career. Although Calkins says Arnold could try a stronger drug regimen, he recommends surgery.

He tells Arnold his condition is not his fault, but there are things he can do to make the surgery more effective, including a sleep study for possible apnea and losing as much weight as possible before the operation.

“You’re a young guy, and you’ve got a lot of years to live,” Calkins says. “You’re going to live longer and better if you’re thinner. I can do my part, but the surgery is going to work better if you also do your part.”

Arnold listens intently and nods in assent. He wants his symptoms to end. “The sooner, the better,” he says.

Calkins agrees. “We have to get you fixed up so you can get back to doing what you love,” he says.