Dome - A Portrait of Progress

A Portrait of Progress

A painting of Julie Freischlag, the first female director of surgery at The Johns Hopkins Hospital, represents an era of gender equity in leadership. 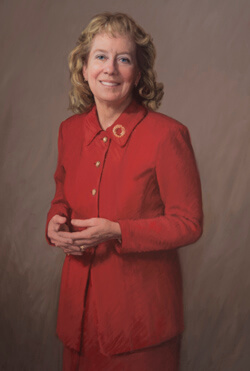 1 2 3 4 5
A replica of Julie Freischlag’s portrait hangs in the Alfred Blalock Building lobby.

Dressed in an eye-catching red suit, her gaze direct and engaging, Julie Freischlag is the life of a small party of solemn peers whose portraits adorn the Alfred Blalock Building’s lobby on the East Baltimore campus.

Last year, when the former director of surgery at The Johns Hopkins Hospital announced she would become dean of the University of California Davis School of Medicine in Sacramento, the department of surgery commissioned a portrait to honor her leadership and trailblazing service as its first female director. It was painted by Maryland artist Lisa Egeli, known for her portraits of academic leaders.

The surgeon deliberately chose to be immortalized in a colorful suit to set her portrait apart from those of her five predecessors, William Halsted, Dean Dewitt Lewis, Alfred Blalock, George Zuidema and John Cameron. “Lisa and I agreed it had to be different,” she says.

Because the original portrait hangs in the Department of Surgery’s Halsted Library, which isn’t open to the public, a replica is displayed in the Blalock lobby. The commission, paid for by Department of Surgery benefactors Mickey Miller Jr. and Susan Miller, follows the Johns Hopkins custom of honoring directors who have stepped down from their posts.

It also seems to signal a new era. To date, roughly an eighth of the portrait collection of the Johns Hopkins Medical Institutions—a total of 40 paintings—commemorates women leaders. That percentage is likely to change as the school of medicine continues to promote female faculty, increasing the proportion of women in all dean and department director positions.

While Egeli’s portrait of Barbara Ruben Migeon, founding director of the graduate program in human genetics, is located on the Miller Research Building’s fifth floor, it can be challenging to find some portraits of Johns Hopkins women. For instance, the painting of Nina Woo Matheson, onetime director of Welch Medical Library, overlooks a Welch reading room not currently used due to the library’s shift to online resources. The portrait of pathologist Florence Sabin, the first woman to attain the rank of full professor in the school of medicine in 1917, hangs in the hallway between the library’s East and West reading rooms. One place where a critical mass of women’s portraits can be found is in the south corridor of the Billings Administration Building. Here, at the Department of Nursing, images of department directors, past and present, are on display.

The history of women’s portraits at Johns Hopkins began rather awkwardly, according to Nancy McCall, director of the Alan Mason Chesney Medical Archives of the Johns Hopkins Medical Institutions. Baltimore philanthropist Mary Elizabeth Garrett, the school of medicine’s earliest major benefactor, paid artist John Singer Sargent half of the cost of her own portrait while the trustees of the Johns Hopkins University paid for the rest. Later on, Garrett paid the full price for Sargent’s monumental group portrait of school of medicine founders William Welch, William Halsted, William Osler and Howard Kelly.

Over the years, the growing presence of women on the Johns Hopkins faculty and the rise of nurse leaders did not inspire a corresponding increase in portraits. After Sabin was painted in her academic regalia in 1920, 40 years would pass before an artist was commissioned to paint another female luminary at Johns Hopkins: Olive Berger, chief nurse anesthetist and director of the Johns Hopkins School of Nurse Anesthesia from 1931 until 1969.

One artistic kerfuffle involved the portrait of Helen Taussig, founder of the field of pediatric cardiology, who became famous for developing the procedure that saved the lives of “blue babies,” children born with a heart defect that prevents normal blood flow. In 1963, some of Taussig’s former fellows commissioned artist James Wyeth to paint her portrait. When they saw the result—an older woman with an unconventionally intense and searching expression—they requested that it not be displayed.

The striking portrait, which has never hung in public at Johns Hopkins, is now part of a traveling Wyeth retrospective. Then on loan to another exhibit, it will not return to the medical archives until late 2016 or early 2017, according to archivist Andy Harrison.

If a disparity exists between the number of portraits of women and men at Johns Hopkins, there’s little difference in the artists’ approach to their subjects, according to Dorothy Moss, associate curator of painting and sculpture at the National Portrait Gallery. Nearly all of the paintings in the Johns Hopkins collection reflect the history of “traditional, academic portraits,” Moss says of the collection, which mainly varies between subjects’ preference for wearing white coats and holding the tools of their trade or appearing in civilian clothes.

Even the more recent works “look to me more like a throwback to the 19th and early 20th century portraits of professionals,” Moss says. Although the genre of portraiture has become more experimental, “the subjects at Johns Hopkins are choosing conservative, academic artists for these commissions.”

That’s not how Julie Freischlag sees her portrait. As she sat for Egeli in sessions totaling 14 hours, her character came to life on the canvas, she says in a phone interview. Of her initial hopes for the portrait, she says, “I wanted viewers to see me, to see who I am, because my leadership is pretty warm and friendly.”

Egeli made that happen, Freischlag says. “My personality jumps off the canvas, almost as if I’m ready to start talking.”

The Year in Review