Dome - Silencing, Not Sounding, the Alarm

Silencing, Not Sounding, the Alarm 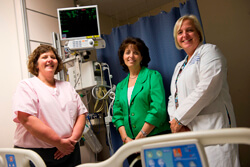 As an intensive care unit charge nurse, Nelly Lopez spent so much of her day managing alarms emitted by bedside patient monitors that she heard phantom beeps long after her shifts at The Johns Hopkins Hospital had ended. Currently a surgical nursing coordinator, Lopez says that an after-work routine of dedicated quiet time and yoga exercises helped her cope with the stress caused by the noise.

Now, thanks to the work of Hopkins Hospital’s Alarms Management Committee, front-line staff members are working in a quieter and less stressful environment that’s safer for patients. Their efforts have also won a national award from ECRI Institute, a nonprofit that conducts research and assesses best practices in patient safety and quality. After identifying alarm systems as this year’s top health technology hazard, ECRI selected the Johns Hopkins team as winner of its 2012 Health Devices Achievement Award for a program that reduced alarms by up to 74 percent on some hospital units.

“In health care we have created the perfect storm with all of these monitoring devices,” says Maria Cvach, assistant director of nursing and leader of the alarm improvement efforts. While machines that track breathing, blood pressure and heart rate, among other indicators, are unlikely to miss a serious change in a patient’s condition, she says they’re often programmed in a way that produces too many false-positive alarms.

Cvach says frequent alarming can cause a “cry-wolf” effect, also known as alarm fatigue. She adds that such situations can be hazardous because nurses and other caregivers can become so desensitized that they are less likely to respond.

When hospital leaders learned that alarm fatigue played a role in a couple of adverse patient events in 2006, they asked Cvach and Andrew Currie, director of clinical engineering, to lead a unit-based project to address the issue. Once the clinical engineering team began pulling reports and could see that staff were inundated with an “astronomical” number of alarms (see By the Numbers), the project expanded hospital-wide.

Although the team knew that many of devices were noncritical nuisance alarms, little research was available to guide them in adjusting alarm parameters. Cvach and committee co-director Adam Sapirstein met with each unit to change alarm settings to actionable levels—the point at which clinicians need to change something about a patient’s care—and develop an improvement plan tailored to each work environment. Pediatric intensive care nurse Judy Ascenzi headed up a similar effort in the Children’s Center.

Felix Guzman, a nurse on the cardiovascular progressive care unit, previously one of the noisiest units, says that excessive noise caused confusion and made it difficult for nurses to perform their jobs. Since the number of alarms was reduced, he says, nurses respond faster and the environment is less stressful for patients and their caregivers.

A new pilot study launched by the committee is testing a system that sends messages about priority alarms to cell phones and pagers carried by nurses, who, with the press of a button, can call for back-up if they’re unable to respond. Another initiative will look into “smart alarm” systems that integrate data from multiple machines and predict problems before they occur.

90 percent of alarms in the Pediatric Intensive Care Unit to detect apnea, a breathing lapse, that were false-positives.

771 Average alarms per patient per day on the noisiest unit, an ICU. That’s more than one alarm per patient every minute.

To read a white paper about the Alarms Management Committee’s efforts, visit http://www.hopkinsmedicine.org/news/using_data_to_drive_alarm_improvements.html.