Dome - A Quest for an Arm Turns Wondrous

A Quest for an Arm Turns Wondrous 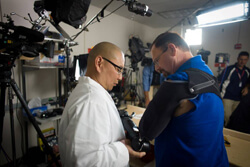 1 2
Albert Chi observes as Johnny Matheny practices thought-controlled robotic motion with his new bionic arm. The mechanical limb, perfected by the Johns Hopkins Applied Physics Lab, is considered the most sophisticated arm ever made and weighs about as much as a human arm. Everything needed to operate it is inside, including a computer.

When he lost his arm to cancer in 2008, Johnny Matheny accepted his new reality and forged ahead. Hoping to turn a negative into a positive, the West Virginia resident began exploring prosthetic options. With so many soldiers returning home from overseas, Matheny reasoned, technology surely had advanced to help those who’d lost limbs in combat.

In his quest for the finest prosthetic arm, Matheny wound up at The Johns Hopkins Hospital, in the care of trauma surgeon Albert Chi, who has a longstanding interest in biomedical engineering and technology, valuing its potential for improving patients’ quality of life. A recent 60 Minutes episode captured Matheny’s story as part of a larger piece on revolutionizing prosthetics (see link below).

Chi and Matheny turned out to be a perfect match. Chi is experienced with a technique known as targeted muscle innervation, by which nerves can be rerouted through spare muscle so that people who’ve lost a limb can operate motorized prosthetics using motor commands. Chi was also aware of just such a prosthetic limb.

Matheny, meanwhile, was an ideal patient, and not only because of his eagerness and compliance. During the operation to remove his arm, his surgeon—based in Pittsburgh—had anticipated that Matheny might one day have access to better prosthetic technology and had been careful to leave his nerve endings intact and long enough so that they could still be accessible, should a technologically advanced arm become available. As a result, Matheny was a prime candidate for Chi’s reinnervation procedure, which he underwent in November 2011.

During the operation, Chi worked closely with plastic surgeon Richard Reddett, director of Johns Hopkins’ Facial Paralysis and Pain Treatment Center, to ensure that the peripheral nerves had the best chance for success. “Rick is a very gifted surgeon,” says Chi, “and I depend on his expertise and support.”

But after three years of having no arm, Matheny’s remaining nerves and muscles—though intact and functional—had forgotten how to communicate with and respond to motor commands. So Matheny, Chi and a team of physical therapists and technicians set out to retrain those muscles and nerves to perform much like they had before he lost his arm. Using a series of tests, Chi and his team found that not only had the surgery succeeded, but that Matheny had exceeded their expectations by demonstrating sensation, feeling and movement faster than anyone could have anticipated.

“The body is amazing in terms of its will to return to normal function,” Chi says. “When you have a missing limb, all the information is there, but the body has no way to get it out. So we rerouted the pathway for that information so that it can be expressed.”

Still, much like the brain needs a mouth to express words, Matheny would need an arm and hand to express movement—something more advanced than his original prosthetic arm, which had a hook for gripping, but offered little movement capability.

Enter Johns Hopkins University’s Applied Physics Lab, where a motorized arm with a five-fingered hand that operates much as a human hand does was nearing completion. Matheny had already been able to test a similar arm during a previous stay at Johns Hopkins. At that time, he was connected to the prosthetic so that he could practice tactile motions, such as distinguishing between his index and pinky finger. He’d also had the chance to practice at home using a computer program that helps trigger pattern recognition feedback.

Last month, Matheny finally took home his own advanced prosthetic arm. The possibility of a better life, he says, far outstrips what he first imagined when he began his search. “I knew medicine was advancing at a fast pace,” Matheny says, “but I had no clue that anything like this was available. After the surgery, I started feeling all of these different sensations. It was crazy, but a good crazy.”

To watch the 60 Minutes segment on this topic, visit cbsnews.com/video/watch/?id=50137987n. To read more about targeted muscle innervation at Johns Hopkins, visit hopkinsmedicine.org/surgery/about/innovations/tmr.html