Dome - A Passion for Inquiry and Teamwork

A Passion for Inquiry and Teamwork

Mark Anderson assumes the role of physician-in-chief of The Johns Hopkins Hospital. 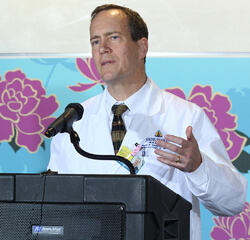 Speaking at the opening of the renovated Nelson/Harvey Building, Mark Anderson says he’s “repeatedly struck by reminders of the incredible history that this institution carries with it.”

Mark Anderson thought he would become a lawyer because he likes to debate—but the lure of science won out. Now a cardiologist known for his research studies of a key protein involved in heart failure and arrhythmias, Anderson brings his passion for inquiry to Johns Hopkins as the William Osler Professor of Medicine, director of the Department of Medicine and physician-in-chief of The Johns Hopkins Hospital. He succeeds Myron “Mike” Weisfeldt.

A third-generation physician, Anderson came from the University of Iowa Carver College of Medicine, where he worked with Paul Rothman, now dean of the medical faculty and CEO of Johns Hopkins Medicine. There, Anderson served as chair and department executive officer of internal medicine since 2009 and as director of the Cardiovascular Research Center since 2012.

Anderson says he was thrilled to join “the country’s premier department of medicine.”

“When you put together the scope of the department—indexed for the talent of the faculty and opportunities to make a difference for the future of academic medicine—with a strong portfolio of research, technology transfer opportunities and an innovative curriculum,” he says, “it’s a really alluring position. It’s also humbling.”

An honors graduate in biology from Macalester College in St. Paul, Minnesota, Anderson earned his medical degree and a Ph.D. in physiology from the University of Minnesota. He completed his internal medicine residency and fellowships in cardiology and electrophysiology at Stanford before joining the faculty at Vanderbilt in 1996. In October 2005, he accepted a position as professor and director of cardiovascular medicine at Iowa.

The cardiologist is widely known for his research on the protein calmodulin kinase II as a central signal contributing to heart dysfunction and arrhythmias. He has published more than 160 peer-reviewed journal articles, book chapters and reviews, and has been an invited speaker throughout the United States and in more than a dozen nations. He has moved his lab to the fourth floor of the Rangos Building, where he says he looks forward to collaborating with Johns Hopkins investigators.

Anderson “has a great sense of where medicine is going and is really good at working to get the resources to achieve that vision,” says Rothman. “He also appreciates all parts of our mission and is very balanced in making sure they all are successful.”

The hospital’s physician-in-chief says he’ll first focus on the department’s role throughout Johns Hopkins Medicine’s campuses and look for opportunities to increase efficiency and work across divisions to strengthen multiple service lines. He’ll also study research teams for products and services that could potentially benefit people. “I look forward to meeting as many people one on one as possible and hearing their aspirations for their careers, the department and their patients,” he says.