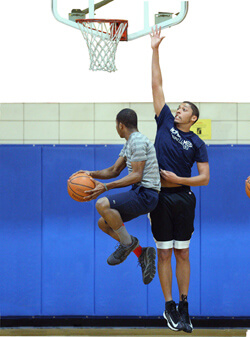 Shedding their winter coats, the high school boys sprint up and down the basketball court, waving and shouting for the ball. Although the classroom claims the bulk of their weekdays, Wednesday afternoons at the Denton A. Cooley Center’s gym belong to these teenagers and their medical school mentors.

“It’s just a chance to have a good time,” says second-year medical and Ph.D. student Robert Wardlow, breathing heavily after a solid hour of rough-and-tumble hoops. “I grew up playing basketball, the same as a lot of these boys. They always look forward to it. And so do I. It’s a nice part of our week.”

The tall, soft-spoken Wardlow is a member of the Johns Hopkins University chapter of the Student National Medical Association (SNMA), an organization focused on the needs and concerns of medical students of color. Members of this close-knit community offer mentorship and valuable advice to male students from Paul Laurence Dunbar High School, which sits only a long jump shot from the medical campus. Once a week, after discussions of college and other future plans, the whole group heads for Cooley’s basketball courts.

The dozen or so high school students participate in the Brotherhood Alliance for Science and Education (BASE), a mentoring program created by the Johns Hopkins SNMA dedicated to increasing the number of underrepresented minority males who graduate from high school and enter college and the field of science.

Mentorship sessions begin with the kind of practical learning the high school students might not otherwise get—even the art of tying a necktie. “We try to provide some enrichment activities for them,” says Wardlow. “College prep activities, tips on filling out college applications and financial aid paperwork. Our focus with these guys is to build long-term mentorship. But basketball is the part they really look forward to.”

Wardlow, a graduate of the University of Maryland, Baltimore County, knows the benefits of such attention. UMBC President Freeman Hrabowski III exerted an important influence on him, encouraging his pursuit of science and medicine. “I can’t even put a value on the time Dr. Hrabowski spent with me and what I learned from him,” he says.

‘A FAMILY AWAY FROM HOME’

The SNMA is the student arm of the National Medical Association, a national alliance formed nearly 120 years ago when physicians of color weren’t permitted membership in the American Medical Association. One aim of the SNMA, which is celebrating its 50th anniversary this year, is to eliminate disparities in minority health care. It also embraces community service and is committed to ensuring the academic and clinical success of medical and premedical students of color. Heavily involved in improving recruitment, it is part of a nationwide effort to create a physician workforce that will be as diverse as the population it serves.

At Johns Hopkins, the category of underrepresented racial and ethnic minorities in medicine includes African-Americans, blacks, Hispanics, Latinos and Native Americans, according to Daniel Teraguchi, assistant dean for student affairs and director of the Office of Student Diversity.

The Johns Hopkins chapter of SNMA  has more than 100 members and serves as a beacon for students of color who are searching for the right medical school. When accepted candidates visit Johns Hopkins, the SNMA hosts a dinner for them to meet faculty and other minority students. This year’s “Second Look” weekend takes place April 10–13.

Teraguchi says the SNMA provides social and academic support for many of the underrepresented minority students who choose Johns Hopkins. “For a lot of these students, the association serves as a family away from home.”

According to Teraguchi, the SNMA is part of the reason minority enrollment at Johns Hopkins is on the rise. The school of medicine has seen a 45 percent increase in minority first-year medical students since 2009. And the percentage of minority first-year graduate students has nearly doubled during that time.

As a first-year medical student, Debebe Theodros was struck by the attention the chapter’s members paid to one another. “It’s a group of people who take care of each other and look out for each other,” he says.

The association also works to strengthen the educational pipeline that leads from elementary to medical school with programs such as BASE and the Health Professions Recruitment and Exposure Program, a nationwide high school science enrichment program aimed at recruiting underrepresented minorities into careers in the sciences and health professions.

“I think our medical students see themselves in a lot of high schoolers who have tons of potential but might need inspiration, opportunities and mentoring to fully tap into it,” Teraguchi says.

Although all of the Dunbar students in the BASE program are male, some of their mentors are not. At first, Nancy Abu-Bonsrah was concerned about her ability to mentor teenage boys.

“I was worried we might not relate to one another,” the second-year medical student says. “But once I got the trust of the guys, it was easy. When they realize that you’re interested in them for their own sakes and are trying to help them get to a better place, they begin to listen like we might have something to say.”

Theodros says that mentoring relationships can continue after the Dunbar students graduate.

“They know we’re always here for them and that we want to keep up with them,” he says. “We want to help with the sorts of challenges they may come up against, the life decisions outside of just grades and academics.”

Romanze Green, who entered the BASE program in the eighth grade and remained through high school, illustrates the reach of such mentorship. Now 21, he is completing his general coursework at Howard Community College and is looking forward to a junior year at the University of Baltimore, where he plans to study journalism and criminology.

He says he learned the importance of completing work on time from his mentor Ross McMillan, an M.D./Ph.D. student, with whom he remains in touch.

“We had a lot of fun playing ball, but the main thing BASE taught us was how to be leaders,” Green says. “It definitely helped put some shape to the future for me.”

Read more about the strategic priority for people online at: hopkinsmedicine.org/strategic_plan/people

Visit https://www.youtube.com/watch?v=vz4h1UcyLwE for a video about Robert Wardlow and the SNMA.

Underrepresented minority enrollment is on the  rise at the Johns Hopkins University School of Medicine.