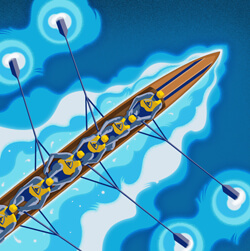 Imagine that your personal income isn’t meeting your household expenses the way it used to— and that you anticipate even higher bills in the near future. Although you may feel anxious, you can also envision the situation as an opportunity to reassess your spending priorities and brainstorm creative ideas for adding dollars and trimming costs.

“For 20 years, life was pretty good,” he said at a recent town meeting. “I would argue we got a little fat and happy during that period.”

But with sequestration—an estimated $1.2 trillion in national, across-the-board federal spending cuts over the next decade—Johns Hopkins now confronts a period of uncertainty in which federal funding for research and clinical care will likely be greatly reduced. Johns Hopkins could lose as much as $71 million annually: $27 million in research grants, $23 million in federal managed care payments and $21 million in Medicare.

Meanwhile, as revenues remain flat and expenses in health care continue to soar, the institution could encounter a “perfect-storm” financial environment, Peterson pointed out.

To stave off such a devastating scenario, Johns Hopkins Medicine leaders have designed a two-year plan to keep the institution financially healthy. Known as “The $150 Million Performance Initiative,” the plan aims to add $150 million to $200 million in annual net operating income by identifying new sources of revenue and philanthropy, managing expenses and becoming more cost-efficient. The first phase calls for raising an additional $50 million in fiscal year 2014.

This financial blueprint is a key part of a five-year strategic plan to be implemented on July 1. The wide-ranging strategic plan was developed to attract the best and brightest employees, to forge ahead with biomedical discovery, to delve further into patient- and family-centered care, to continue to lead the world in medical education and to create a milieu of sustainable performance.

“I believe that over the next three to five years, we won’t be able to think in the same business-as-usual context as we knew for the past three to four decades,” he says. “It’s going to be a lot different, and we’re going to have to take expense-side management a lot more seriously.”

Everyone, Peterson says, has to coordinate and row together to move the organization forward and in the same direction.

“What we’re up against is that as a vibrant enterprise, we’re going to have to figure out ways to grow our business,” he says. “We have to now work together to find cost-effective ways of caring for patients.”

Peterson says Johns Hopkins Medicine will increasingly move in the direction of population health management and is actually well-equipped to enter this new era.

“We’ve got our challenges ahead of us,” he says. “We will be able to do well, in my opinion, but we are going to have to continue to pay attention to the fact that the conditions under which we’ll be operating will be significantly different.”