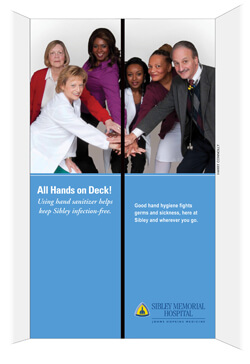 Elevators have long been the domain of chance encounters, people-watching and daydreaming. But as the doors close inside Sibley Memorial Hospital’s 10 elevators, a new distraction will compete for riders’ attention.

And that’s exactly the point of Sibley’s new hand hygiene campaign. The “vinyl wrap”—to use the parlance of the advertising industry—on interior elevator doors showcases employees who champion vigilance about using soap and water and/or hand sanitizer to fight germs and protect patients.

The idea originated with a group of Sibley executive team members who visited a Los Angeles hospital, where they observed a similar elevator wrap campaign on hand hygiene. On their return, the executives shared their enthusiasm for duplicating the project at Sibley. Though the idea won instant favor, the first set of designs didn’t include people, which troubled Sibley President Chip Davis. “We need our own real employees pictured on the elevators,” he says. “This is a great opportunity for staff to come together from across disciplines, at all levels.”

And so, with extensive coordination from Sibley’s public relations and marketing staff as well as department heads, the elevator vinyl project got under way. Participants in the photo shoots included hand hygiene champions from nursing, education and training, finance, pharmacy, medical oncology, and security, among others.

The elevator wrap is the culmination of a series of efforts to raise awareness about keeping Sibley staff focused on hand hygiene and preventing infection. A poster campaign debuted in October 2012, urging staff members, patients and visitors to perform hand hygiene before entering each unit. To reinforce the message, small, colorful vinyl clings were placed on the mirrors in patients’ bathrooms to remind people to wash their hands. The strategy, says PR and marketing specialist Tiffany Payne, “is to have as many visual cues as possible.”

During that same period last fall, patients were invited to report hand hygiene compliance by Sibley staff in outpatient areas, including imaging, the breast center, endoscopy and the ambulatory surgery center. Internal “secret shoppers” have also been tracking compliance.

These efforts appear to be paying off. For the last quarter in 2012, outpatient units reached 95 percent compliance, with more than 1,300 observations, surpassing the Johns Hopkins Medicine goal of 90 percent. Inpatient hand hygiene compliance at Sibley remains stellar within JHM—at 96 percent in December 2012 and surpassing Sibley’s goal of 85 percent in eight consecutive months.

Joyce Scott, clinical associate in medical oncology/infusion, was among those asked to participate in the photo shoots. Noting that the group had fun and that the experience “felt productive,” Scott says the vinyl makes an important statement. “Hopefully,” she says, “others who see us with our outstretched clean hands will get the message [that we care about] the welfare of our patients.” Indeed, Sibley officials expect the campaign to trigger more than a few positive elevator moments.