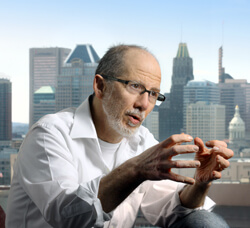 Bert Vogelstein remains skeptical of scientists and others who talk about cures for cancer.
photo by Keith Weller

The moment was classic Bert Vogelstein. In his characteristically understated manner, Vogelstein recalled when he first learned he was among 11 winners of the inaugural Breakthrough Prize in Life Sciences.

Vogelstein, co-director of the Center for Cancer Genetics at the Sidney Kimmel Comprehensive Cancer Center, received an email from Art Levinson, chairman of Genentech Inc., who helms the prize’s foundation board.

“I thought he just wanted me to give a lecture,” Vogelstein says. “But the next day we talked, and he said, `We’d like to consider you for this award.’ I said, `Well, what are my obligations?’ He said no strings attached. Then, he said, `You know, this prize comes with a substantial monetary component. It’s $3 million,’ at which point I said, `Well then, I definitely accept.’”

Vogelstein, 63, was recently awarded the prize for his landmark work in cancer genomics and tumor suppression genes. The prize was established by such Internet luminaries as Levinson, technology entrepreneur Yuri Milner, Google founder Sergey Brin and Facebook CEO Mark Zuckerberg. Anne Wojcicki, founder of the genetics company 23andMe and a Breakthrough board member, said the prize recognizes scientists “who think big, take risks and have made a significant impact on our lives.”

Vogelstein, most would agree, falls into that category. Over the past three decades, he and his collaborators at Johns Hopkins have revolutionized the field of cancer research. In 1989, their identification of TP53, a gene mutation in colon cancer also found in most types of human cancers, changed the way scientists study the disease.

A few years later, Vogelstein and his research partner and lab co-director, Kenneth Kinzler, identified genetic alterations leading to hereditary forms of colon cancer and developed tests to detect mutations. That testing has since become routine for patients with family histories of colon cancer and significantly influences how they are diagnosed and treated. Vogelstein and Kinzler also have developed a stool test to screen genes found in more common colon cancers. And most recently, they and their colleagues mapped cancer genomes that have led to the discovery of gene mutations found in tumors of the brain and other organs.

At the core of Vogelstein’s life’s work is his constant mantra that cancer is in essence a genetic disease.

“When many people think of genetic diseases, they often think of a hereditary basis. That’s only one kind of genetic abnormality,” he says. “In most cancers, the mutations are not inherited but occur after birth, because of mistakes that cells make. Every time a cell divides, it makes a mistake, and if those mistakes occur in one of the cancer-causing genes, this starts the process off. A series of mistakes, occurring over decades, eventually leads to malignancy.”

Vogelstein first became interested in cancer research as a pediatric oncologist at The Johns Hopkins Hospital while treating a 4-year-old leukemia patient.

“Her parents asked, `Why did this disease strike my little girl?’ And neither I nor anyone else could give them any sort of answer,” he says.

Since then, Vogelstein has spent much of his career laboring to understand what causes cancer and how to best treat it. What he’s found is that cancer is “caused by an accumulation of errors, mutations, in a series of genes, and we now know what those genes are and how they’re altered and in certain cases how they work. So it’s gone from a complete black box in the ’70s to a disease that’s really well understood, at least in outline form.”

When asked why cancer hasn’t yet been eradicated, Vogelstein explains that scientists needed to first understand the basis of the disease before effectively treating it.

“The whole history of medical research is once you understand a disease, it’s only a matter of time before you can do something about it,” he says. “Cancer’s not just one disease but hundreds of different diseases all lumped together. But now that cancer is beginning to be understood at a molecular level, it’s only a matter of time before cancer deaths start to decrease.”

Vogelstein remains skeptical of scientists and others who talk about cures. “What we really should first be thinking about is detecting and preventing cancer at a stage when it can be cured by conventional means. That’s what our lab is devoting a lot of its efforts to now.”

Vogelstein admits he’s a bit embarrassed by the attention he receives. But he looks at the accolades and awards as a tribute to his team. (He plans to donate the $3 million Breakthrough Prize money to research endeavors, his grandchildren’s college education, and to charities supporting early childhood education, which is his wife Ilene’s passion.)

“I look at these awards as celebrating discoveries made as the result of research done by many people, inside and outside my lab. If you win, you’re a symbol for that achievement.”

In the future, Vogelstein believes cancer researchers will be focusing on learning more about how genes work in human cells and on developing improved therapies to counteract the negative impact of defective genes.

Vogelstein says researchers are entering a new phase of cancer research. “From a personal vantage point, it’s very satisfying to have worked to understand this disease for so long and then be able to participate in taking this understanding to patients.”

A Great Sense of Mission

Even though he’s worked in Bert Vogelstein’s lab for six years, Isaac Kinde still feels like a newbie. “I’m newer, compared to the faculty,” he says.

But Kinde, a sixth-year Ph.D. student, is quite aware of his good fortune in working with the team that has fundamentally changed how cancer is understood.

Yet he says there’s a lack of pretense or self-importance in the lab, a tone largely set by its unassuming leader. “Bert is here all the time, and he’s a great mentor,” Kinde says, “very down-to-earth and friendly. You only realize in retrospect how Bert makes you work harder without pushing you. You want to be the best you can be and produce, but you don’t feel pressured.”

Still, there’s a great sense of mission in the lab, Kinde says. He says the faculty makes sure trainees understand the “amazing opportunity to do research on a problem almost everyone can relate to.”

Kinde feels Vogelstein fully deserves the Breakthrough Prize in Life Sciences and all of his other awards. “But Bert happens to be one of the most humble people I know,” he says. “He likes to share the credit, but he’s very involved in the actual research. And it further motivates us to continue the work.”

Kenneth Kinzler, who has worked with Vogelstein for more than two decades, agrees. “We focus on the questions, and when they’re addressed, we move on to the next question. We’re always looking for other opportunities.”