Dome - Every Picture Tells a Story

Every Picture Tells a Story 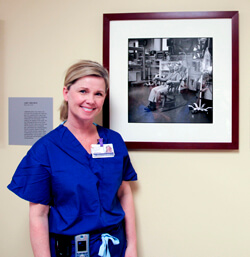 Every Picture Tells a Story: Why is this woman smiling? Karen Frank, a neonatal intensive care unit nurse at The Johns Hopkins Hospital, checks out a portrait of herself sitting in a rocking chair in the NICU during the recent unveiling of a special photo exhibition. The exhibit, displayed in the hallways of Hopkins, is part of “The American Nurse Project,” a nonprofit project aiming to capture and tell the personal stories of American nurses through photography, film and book. Eleven black-and-white photos were unveiled in the Nutting Corridor, and Carolyn Jones, photographer and author of The American Nurse, was on hand for the unveiling. Besides Frank, other Hopkins nurses featured in the project include Patricia Abbott, Amy Brown, Naomi Cross, Hershaw Davis Jr., Pam Dodge, Bryan Hansen, Sharon Kozachik, Melissa Mason, Amanda Owen, Michelle Patch, Allisyn Pletch, Travis Simonetti, Ranimaria Toldeo, Carly Turner, Germaine Williams and Rhonda Wyskiel. Cross, a labor and delivery nurse, will also be included in an upcoming documentary extension of the project, which is currently in production and will be released later this year. Proceeds from the new book The American Nurse will benefit a scholarship fund designed to support the education of nursing students throughout the nation and efforts to further the mission and vision of “The American Nurse Project.”