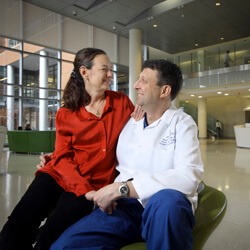 After trauma surgeon David Efron found his wife slumped on the floor of their home in full cardiac arrest, he was nearly devoid of hope. Three weeks later, thanks to extraordinary critical care and state-of-the-art facilities, Anne was off all artificial support and walked out of the Sheikh Zayed Tower on her own.
photo by Keith Weller

On Monday, Jan. 28, 2013, the unthinkable happened. I came home, post-call from in-house trauma coverage, a little after 8 p.m., and found my wife unconscious, pulseless, lifeless. Anne, who had a history of what was thought to be a benign cardiac dysrhythmia, was in full cardiac arrest. I am not sure how I was able to move her from the sofa to the floor, dial 911 and perform CPR for what seemed like an eternity. As director of adult trauma and chief of the Division of Acute Care Surgery at The Johns Hopkins Hospital, resuscitation of critically ill and injured patients is at the core of my training, job and vocation. I have done this hundreds, if not thousands, of times. This was truly surreal. How long was she down? How long were her brain and other organs without oxygen?

The emergency medical responders relieved my efforts on their arrival. Her rhythm was refractory to shocking, and it took eight attempts to regain a lasting stable “normal” rhythm. This only happened on arrival at the emergency department at St. Joseph’s Hospital in Towson, the closest facility to our house. For 40 minutes, she had good CPR—but 40 minutes is a really long time. By this time, her heart was very badly stunned. Rapid total body cooling had begun for organ (primarily brain) protection; however, she was progressively more unstable. At 3 a.m., it was clear that she was beyond the supportive capabilities of St. Joseph’s. The decision was made to place an intra-aortic balloon pump, the only chance to salvage some stability for transferring her to higher care.

The interventional cardiologist at St. Joe’s skillfully placed the balloon pump and had spoken to the University of Maryland, as it is part of that hospital system. They had a bed, but I kept thinking of Johns Hopkins. I called the attending in the Coronary Care Unit at The Johns Hopkins Hospital. On this day, it was Steve Schulman, who is also the medical director of that unit—and a friend and colleague. The irony is almost absurd. Anne, currently a project administrator with the Johns Hopkins Center for AIDS Research in the Division of Infectious Diseases, is a nurse who worked in the Johns Hopkins CCU for nearly 10 years. We had a bed; we were coming home.

The Johns Hopkins Critical Care Transport team (the “purple people,” aptly named for the bright purple scrubs that they wear) came to get her. She was one of the most critically ill patients I have ever seen transported—a masterful team effort. At this point, I was almost devoid of hope. I had been awake for 60 hours. She was hanging on by chemicals and mechanical support.

We arrived at the CCU of the Art and Pat Modell Heart and Vascular Institute on the fifth floor of the Sheikh Zayed Tower. I come to this unit frequently as a consultant for surgical emergencies in critically ill patients. Clearly, this day was different. We were met by Steve Schulman, Ashish Shah (cardiac surgeon), the perfusionist team, James Black (vascular surgeon), Pam Lipsett (director of surgical critical care)—all friends, along with others who carry the same labels. My transition from surgeon to family member was complete. I am told there was uncharacteristic quiet as they tended to her. She needed extracorporeal membrane oxygen support (ECMO). Even on the balloon pump, her heart was too weak; the heart and lungs needed to be rested. She was too unstable to go to the operating room; Dr. Shah made the decision to go onto ECMO in the room. Dr. Black assured flow to her legs, compromised by the ECMO cannulas (tubes inserted into the body for removal of fluid). Doctors Schulman and Lipsett managed her support. Thus we started 16 days in the CCU.

Anne’s progression from full ventilator support with inhaled nitric oxide, to aortic balloon pump, to ECMO, to walking out of the hospital was nothing short of extraordinary. Six days later, she was off all artificial support, speaking to me and clearly demonstrating no neurologic injury. There was the answer: not long enough to cause damage. Many things contributed to this: a young, otherwise healthy woman, rapid and effective CPR, an extremely dedicated first responder crew, outstanding initial care with efficient and effective cooling protocols, skillful interfacility transport, availability of cutting-edge mechanical support techniques, practiced critical care and critical care nursing and state-of-the-art facilities. There are many institutions that have these tools, but in my opinion, few have the total ability.

The Power of Modern Facilities

In April of 2012, we moved into the new building. My division moved into a brand-new suite on the sixth floor of the Sheikh Zayed Tower. This has allowed for more efficient patient care and research productivity. We are close to the Surgical Intensive Care Unit on Zayed 9 East and the operating rooms on each of three floors below. We have six state-of-the-art critical care receiving rooms in the new emergency department, which spans the footprint of both the Zayed and Bloomberg Towers. The operating rooms are also state of the art. Over the past year, I can recount at least a dozen patients from my division alone for whom we have cared and whose stories and recoveries are as remarkable as Anne’s. Prior to the move, most of my trauma/emergency cases were performed in the operating rooms previously used by Alfred Blalock, an unusual source of pride and discomfort. These were mostly small rooms, cramped with the occasional infrastructure malfunctions of an aging facility. As a practitioner, the move has allowed us to bring more to our patients than ever before.

As a patient’s family member, I was able to stay at my wife’s bedside, rest in her room and gather with relatives and friends in the waiting areas. I came to Johns Hopkins as a surgical intern in 1994. Over the years, without choice, I have had many conversations with families in hallways and cramped waiting rooms. Those days are gone; we can now communicate comfortably and in privacy. We can provide complete care—care which my wife, myself and our family received.

Anne went back to work five weeks after her arrest. The statistics say where we are today is highly improbable, and while I don’t believe in miracles, recoveries like this cannot happen unless there is a place like this, made possible by benefactor generosity and vision. For that I will be eternally grateful and continually celebrate the memory of the namesakes of donation.