Dome - The science of aesthetics

The science of aesthetics 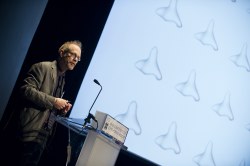 Ed Connor paired with modernist sculptor Jean Arp to test which forms people find the most and least pleasing.

For four months earlier this year, visitors to Baltimore’s Walters Art Museum were human lab rats. Donning pairs of 3-D glasses, they were invited to view morphed images of globular pieces crafted by 20th century modernist sculptor Jean Arp and choose images that they found the most and least pleasing. Their responses were gathered in a nearby Lucite box, destined for the lab of Johns Hopkins University researcher Ed Connor, director of the university’s Mind/Brain Institute.

This wasn’t some sort of experimental art project—it was actually a foray into a new field known as “neuroaesthetics,” in which brain scientists seek to answer a myriad of questions about how the brain creates or reacts to art.

While researching such topics might seem frivolous on the surface, scientists delving into the field point out a number of potential practical applications, such as using dance to treat movement or emotional disorders, creating hospital architecture that can facilitate easy navigation in a crisis, and helping artists and non-artists alike to develop the cognitive skills that lead to innovative, creative ideas.

To encourage conversation between scientists, artists and other people interested in the topic, Johns Hopkins’ Brain Science Institute (BSI) recently convened a two-day symposium, taking place first at the American Visionary Art Museum and the next day at the Baltimore Museum of Art. With a mix of artists and researchers from Johns Hopkins and other institutions, attendees participated in a variety of panel discussions on topics as varied as how the brain creates and processes dance, architecture, music, sculptures and paintings.

While connecting neuroscience and art might seem like an unlikely target for the Brain Science Institute—whose other endeavors include funding efforts to bring new treatments for mental illnesses from the laboratory to patients’ bedsides—BSI Director John “Jack” Griffin explains that encouraging unusual avenues of research is an important part of its mission.

“We have always looked for research areas,” he says, “that are ripe for study but not being studied in a systematic way.”

That description fits this research to a T, Griffin says. Hundreds of unanswered questions cross-link neuroscience and art: What makes art special? Why is art something that humans do, but other animals don’t? How do the visual inputs of a painting or the audio inputs of a symphony tap into the brain’s emotional centers? We don’t yet know.

According to Griffin, this initial meeting fulfilled the BSI’s expectations: spurring interesting discussion and encouraging collaborations between neuroscientists and artists.

How such collaborations might benefit scientists is clear to Charles Limb. The Johns Hopkins otologist conducts research on how the brain works during improvisation—for example, while a jazz musician is playing or a rap artist is freestyling. By observing individuals work their craft, scientists like Limb could gain much-needed insight into how improvisational artists create new content on the spot—something that nonartists might work to their advantage, say, in developing that last-minute presentation that the boss needs by noon.

Scientists might also be able to gather clues on how artists manipulate their patrons’ brains, creating the illusion of motion in a painting, for example, or communicating a sense of melancholy in a violin concerto.

Artists might also benefit, Limb says, by learning how to wield their skills in new and better ways, using the information gathered from basic neuroscience work.
Connor’s work with the Walters Museum, which was partially funded by the BSI, was one fruitful collaboration that was featured at the BSI meeting.

After gathering hundreds of visitors’ inputs on the morphed Arp sculptures, preliminary data showed that the vast majority of people preferred the objects that were fuller and rounder—more like the original sculpture, which visitors weren’t privy to before judging the morphs. Connor plans to publish this finding in a research paper he’s writing.

Vikan notes that it’s a mystery how Arp managed to sculpt the type of image that people happen to prefer to look at—the precise reason why artists and neuroscientists should be talking with each other more. “Artists seem to be doing the work of neuroscience intuitively,” he says. “It’s a wonderful thing to have this shiny new tool in the toolbox for understanding art.”