Dome - The next step 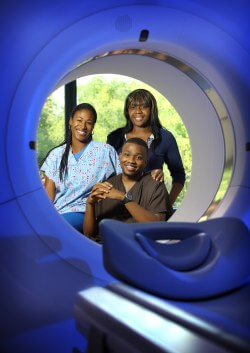 Anthony Bowles, a patient transporter in the Department of Radiology, says he used to “battle” with management about what he considered to be unreasonable work expectations of staff and the best ways to implement policies and procedures.

Recognizing the outspoken Bowles’ potential, his supervisor recommended the department’s Future Leaders program to help him learn how to channel his assertiveness into problem-solving and to provide him a development track for personal and professional growth.

The four-year-old training program is offering dozens of other frontline employees like Bowles the opportunity to be coached and developed to enhance their skills and to walk in the shoes of their supervisors.

“He is very vocal in staff meetings,” says Corey Rhames, Radiology ancillary operations manager. “And because of that I could see he had leadership skills and a strong character.”

Training is a key ingredient in keeping a 500-member staff engaged, says Radiology Administrator Marty Bledsoe, who helped create the program in 2006. Bledsoe believes that Future Leaders and the managerial and customer-service training are part of the reason that the department is sustaining higher-than-average employee engagement scores, which rose from 3.7 in 2007 to 4.01 this year, a significant jump according to the Gallup Organization, which administered the survey.

More than three-quarters of the department’s 24 units improved from their 2009 results, and five fall in the nation’s top 25th percentile of high-performing work teams. Another half-dozen are above the mean.

“It’s important that people have a fulfilling job with an opportunity for growth,” Bledsoe says. “After all, many people spend more time at work than at home. They have to get something meaningful out of that time.”

The training benefits the department also. “Pretty soon you have a critical mass of people who have a greater knowledge of things,” he adds.

Some 42 employees have enrolled in the yearlong Future Leaders, and another class recently convened. The program combines daylong, once-a-month classroom instruction about meeting facilitation, presentations and work flow with team-building exercises and problem-solving projects. Some of the graduates have been motivated to pursue other jobs and advance their education. For others, the outcomes have been more behavioral:   improved understanding of operational challenges, greater confidence and stronger collegial relationships.

Bowles, who worked in the hospital’s kitchen when he first came to Hopkins in 2006, says the program’s communications and problem-solving exercises helped him express his concerns and opinions in a less confrontational manner.

“I realized that we’re a family here. We learn to respect each other and connect. Everyone needs one another to do their jobs,” he says. He also appreciates learning how to do Powerpoint presentations and speak in front of a group without getting nervous—skills he says he’ll eventually transfer to a higher-level position and use while pursing a bachelor’s degree.