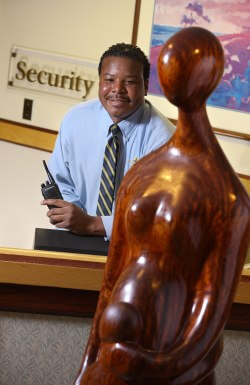 Mary “Liz” Garcia doesn’t remember what she did that got her recognized in a patient satisfaction survey. But it was enough to inspire a patient to write about the night nurse in the labor and delivery unit, “My postpartum nurse, Mary, seemed to genuinely care for me. She even hugged me as we left the hospital.”

Many employees, like Garcia, go well beyond the norm in providing excellent patient service.

Now, Hopkins Hospital has rolled out an incentive program, Pay It Forward, that acknowledges employees for their exemplary service. Commendations, such as the one from Garcia’s patient, are first forwarded to Ronald R. Peterson, president of The Johns Hopkins Hospital and Health System, who sends each recipient a congratulatory letter. These letters also inform them that they’re eligible for a $1,000 cash drawing.

But there’s a twist that completes the program. Before their name goes into the drawing, employees must name a colleague who helps them succeed and explain how. For Garcia, that was Ernest Samuel, the unit’s security officer, who can be a nurse’s right hand when the stress and drama of giving birth can get the better of patients and family.

She recounted how Samuel helped her with a mentally challenged woman who mistakenly thought she was in labor. The woman’s family had sent her alone by ambulance and refused to pick her up after the medical staff confirmed that she was in false labor. Samuel calmed the patient and arranged for an escort to her East Baltimore home.

Thanks to Garcia’s compliment, Samuel was one of four $1,000 winners from among 360 names at the inaugural Pay It Forward raffle, held this October. The names were drawn from four different bins: one for hospital and health system employees and one for their recommended colleagues, and then one for physicians and residents, with the last bin for their Pay It Forward colleagues. “I was shocked but thrilled. I was just doing my job,”says Samuel, though he acknowledges that he tends to have good instincts with people. He plans to use the money toward a cruise.

If raffles seem out of character for Hopkins, they have precedence—and transformative power—says Lara Klick, Howard County General Hospital’s director of service excellence. In the two years since that Hopkins affiliate introduced its version of the Pay It Forward program, called Because We Care/Thank a Teammate, patient satisfaction scores have jumped from the 10th to the 65th percentile. Now they’re holding steady at the 50th percentile. (Johns Hopkins Bayview Medical Center has also jumped on the bandwagon. Its first raffle was held last month.)

The previous service recognition program, Catch a Shining Star, had a top employee prize of $500. Asked why the prize was increased, Becky Zuccarelli, the health system’s senior director of service excellence, says leadership is “demonstrating its commitment to our staff and to service excellence through this program. I can’t think of a better way to reward people who have created positive experiences for our patients, their families and each other.”