The Cutting Edge - Appreciating the benefits of clinical research

Appreciating the benefits of clinical research 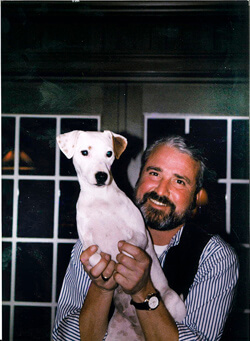 Edwin Lewis, shown here with his beloved companion, has made an outright gift to support the research of surgeon Anne Lidor.

When Edwin Lewis learned that he needed gallbladder surgery, he consulted the best physician he knew. And that physician sent him to Johns Hopkins gastrointestinal surgeon Anne Lidor.

“She exuded confidence,” says Lewis. “Everything she said made sense. I thought she was incredible.”

Even after the operation, when a complication arose that caused a significant amount of pain, Lewis remained steadfast in his admiration of Lidor. “The care she provided, her follow-through, her explanations, how I was treated—everything was great,” he recalls.

Since then, Lidor has also helped Lewis find appropriate physicians for both his father and his mother when they were dealing with health problems.

“She’s rare,” he says. “In fact, everyone at Johns Hopkins is unbelievable. Every doctor I have met there is so nice and professional and courteous and caring. I don’t have enough adjectives. Every time there, you feel like you’re in good hands. As a result, I want to be a part of helping their research and the hospital and future patients.”

Today, by supporting Lidor’s research, that’s what he’s doing. Lidor focuses on minimally invasive surgery and the resulting outcomes. By comparing laparoscopic and open procedures, she examines quality-of-life issues that affect patients following surgery, in hopes of pinpointing the benefits of more frequently turning to laparoscopic techniques. In addition to a having busy clinical practice, she is conducting clinical trials to determine the best procedures and follow-up options for patients with complex hiatal hernias, as well as diverticulitis surgery outcomes in patients older than 65.