The Cutting Edge - The Influence of Michael Choti

The Influence of Michael Choti 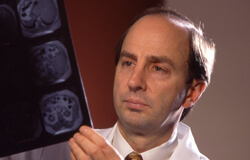 After a 21-year career at one of the nation’s most distinguished hospitals, surgical oncologist Michael Choti has moved on to lead the surgery department at one of the country’s newest.

Choti completed his general surgery training at the University of Pennsylvania and a surgical oncology fellowship at Memorial Sloan Kettering Cancer Center before joining the full-time faculty of The Johns Hopkins Hospital in 1992. As vice chair of the Department of Surgery and a professor of surgery, oncology and radiology, much of his research focused on surgical innovation, including robotics and image-guided surgical cancer therapy. In September, however, he left Johns Hopkins to join the faculty of UT Southwestern Medical Center as chair of the Department of Surgery at William P. Clements Jr. University Hospital, which opens in 2014.

“I’m confident that the department will prosper under Dr. Choti’s leadership,” says Gregory Fitz, dean of UT Southwestern Medical School. “His perspectives in science, education, and exemplary clinical care and research will make a difference.”

“A highly sought-after surgeon, Choti was a favorite among patients, many of whom were so grateful for the care they received under his watch that they decided to give back through donations and fundraising. One of these people is Dwayne Frazier, the cousin of one of Choti’s patients at Johns Hopkins, Shawn Felty. “Shawn really liked Dr. Choti,” recalls Frazier. “They just had a really great connection. It was a perfect match for us. The time Dr. Choti took to talk to my cousin and our family, in particular his uncle, Jack, and to really sit and have conversations with them before and after the surgery, meant so much to us. It just felt right. At some hospitals, you’re really just a number. But it wasn’t like that at Johns Hopkins.”

To honor Shawn’s memory, Dwayne and Jack Frazier established the Shawn Felty Cancer Fund to support colon cancer research. Through various fundraising events and the generosity of their friends and family, the Fraziers continue to donate to Johns Hopkins following Dr. Choti’s departure, now in support of the important work of Dr. Tim Pawlik, chief of the division of surgical oncology.

I wouldn’t be where I am today without Mike Choti. For one thing, he was my surgeon and he saved my life. Then, he hired me to do patient education work for him in 2002; that was all his vision. I could not have done it without his persistence, his guidance and his knowledge. He asked me to work for him when I went for my first follow-up visit after surgery. I was so young then, and I was still going through treatment. Plus, I already was working at Johns Hopkins as a program coordinator for what was then the Office of Faculty, Staff and Retiree Programs, and I loved my job. My head was spinning. I turned him down. Every time I went back for a follow-up appointment, he’d say, “Are you ready?” and my answer was always the same: “No.” However, each visit I would feel more and more excited about the prospects of working for him. Finally I was ready, and I was fortunate he still had the opportunity available for me.

Later, when I wanted to pursue medical education through nursing, he was instrumental in supporting me through nursing school, when I combined working for him with my studies. In so many ways, I wouldn’t be where I am today without him.

With some excess unrestricted funds, Mike decided to create an award to honor faculty earning the highest ratings in patient satisfaction. He is a wonderful example of a patient-centered surgeon, as his patients just love him. The first annual Michael A. Choti, M.D., Faculty Patient Satisfaction Award will be given in June 2015—a $5,000 gift to the surgery faculty member earning the highest ranking from our Press Ganey survey. We have teaching awards and residency awards, but we’ve never really had an award for patient satisfaction, so this is unique. We announced the award at his farewell dinner, and people were delighted. I think they’ll be more excited when they win!