The Cutting Edge - A Victory Over Cancer: A Gift for Others

A Victory Over Cancer: A Gift for Others

Some people hear a diagnosis of pancreatic cancer and think “death sentence.” Not Paul Jordan. 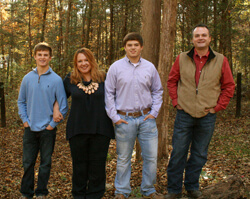 1 2
After a lifesaving operation at Johns Hopkins, Paul Jordan, right, along with his wife, Angi, sponsored a symposium on increasing awareness of pancreatic cancer. At Paul’s side, from right to left, are son Jackson, Angi and son Nick.

For Paul Jordan and his wife, Angi, his diagnosis meant it was time to rally together and fight back. And, whether fortunately or unfortunately, the couple knew where to start: A few years back, Angi had experienced a health scare of her own. In their quest to find the best physicians for her, the Tennessee-based couple turned to U.S. News & World Report’s best hospitals rankings and to Castle Connolly Medical Ltd., which publishes annual rankings of the country’s top doctors. This time, Paul says, their research led them around the country and eventually to the Baltimore office of surgical oncologist Timothy Pawlik at The Johns Hopkins Hospital. And from the moment they met, the Jordans felt a connection.

“The first time we met, honest to goodness, I knew within 30 seconds that this was the guy who was going to do my surgery,” Paul says. “He was warm and compassionate. You could tell he was a genuine guy. You could tell he really cared about you as a person.”

Strongly attached to their own Christian faith, the Jordans also noticed a degree in theology hanging on the wall of Pawlik’s office. That, Angi says, boosted their confidence in him even more. Then he said exactly what the Jordans wanted to hear: “He just looked at me and said, ‘We will take good care of you.’ He probably said that four or five times.”

And so, just over a month from the day of his diagnosis, Paul Jordan was admitted to Johns Hopkins, where Pawlik performed the Whipple procedure. Over the next week, the surgeon visited with Paul every day, often coming in at 6 a.m., just to see how he was. Meanwhile, the nurses and staff in the Weinberg Building were becoming like family. “There was never a breakdown in communication,” Angi says. “I think that was a key part of Paul’s recovery.”

Seven days after his surgery, Paul was discharged home. And though, shortly after, an infection brought him back for four days, today he’s back home with his family—including the couple’s two sons—and doing well. So well, in fact, that the Jordan family was inspired to give something back.

And so they sponsored the Paul and Angela Jordan Lectureship in Hepato-Pancreato-Biliary Surgery, an educational symposium focused on increasing the awareness and dialogue about pancreatic cancer and fostering collaboration among physician-researchers at Johns Hopkins and beyond. “If we can do anything that enables other people to have the same experience we’ve had with the expert surgical care and support we’ve received, then it’s worth every penny,” Angi says. “We hope to continue to be fortunate enough to be able to give more in the future.”