The Cutting Edge - When a Simple Meal Can Spell the ‘Scalpel’

When a Simple Meal Can Spell the ‘Scalpel’ 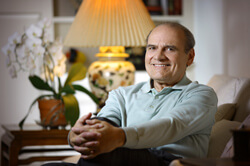 Paul Castaldo credits Johns Hopkins surgeons with saving his life over the years. In addition to his most recent procedure by Michael Zenilman, Castaldo was operated on twice by John Cameron, to whom he demonstrated his gratitude by making a gift to support Cameron’s work.

It started innocuously enough, with a helping of beans and rice. But that one meal nearly killed Paul Castaldo.

Diagnosed at age 10 with Crohn’s disease, Castaldo—now 66—learned long ago that some foods just weren’t a good idea. Eat the wrong thing and he could find himself in agony with an intestinal blockage. No food, no matter how delicious, is worth that kind of suffering. Given his usual caution, he was surprised when this particular meal left him with excruciating stomach pain. Still, it wasn’t the first time it had happened, and usually it passed. This time, he assumed, would be no different. When it didn’t pass, as a precaution he checked himself into Suburban Hospital. Once the food had worked its way through his system, he should have felt better, but his health continued to deteriorate. A week later, the attending physician had upsetting news: “He said I may have only a day or two to live unless I had an emergency operation,” Castaldo says.

Indeed, Castaldo’s condition was critical. As the food had passed through his system, it had perforated his bowels, causing more pain and, even worse, a massive infection from waste seeping into his abdominal cavity.

Having been a surgical patient at Johns Hopkins for over 20 years, Castaldo asked to be transferred to Hopkins’ main campus in downtown Baltimore. While the Suburban staff made arrangements for the transfer to Baltimore, his wife, Atsuko, began making phone calls to Hopkins, trying to reach anyone who might be able to help. Ultimately Michael Zenilman, the recently appointed regional director of surgery, was asked to head to Suburban to evaluate Castaldo himself. “He was too sick,” Zenilman recalls. “If he’d been transferred, chances are he wouldn’t have made it. He needed an immediate emergency operation.”

Several hours later, the procedure was a success, although Zenilman had to perform an ileostomy—something Castaldo had strived to avoid his entire life. Even with the procedure over, he wasn’t out of the woods yet. The next day, Zenilman discovered that Castaldo had heavy internal bleeding and required a second emergency operation. “He was great,” Castaldo says. “If he hadn’t been there, I would have bled to death that night. He saved my life twice over a 24-hour period.” Castaldo spent another six weeks in the hospital fighting multiple infections caused by the perforation.

A year later, however, he’s thriving. Having gained back the 50 pounds he lost during his ordeal, Castaldo recently underwent another procedure with Zenilman to reverse the ileostomy. He’s back on his feet and back at the dinner table, eating as conscientiously as ever. And, despite his careful diet and his frightening experience, he refuses to live in fear of another future incident. “Even though I’ve had this problem my whole life and have endured six major surgeries in the last 20 years,” he says, “I don’t really think of myself as a sick person.”