The Cutting Edge - Unraveling the Brain Chemistry of Food Addiction 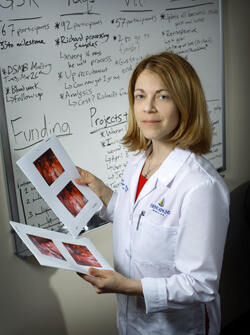 Kimberly Steele: “If we’re able to figure out a link between the brain and food rewards, we could potentially figure out if there’s a pharmacological way to stop obesity.”

Most people don’t get fat from eating broccoli and oatmeal. Instead, it’s the fast food, cheese puffs and microwave pizzas that are expanding American waistlines and raising obesity to epidemic levels. And, even as news reports warn of the health risks associated with weight gain, the nation’s love-hate affair with cheeseburgers and French fries and ice cream rages on. In fact, for some, giving up such foods proves as difficult as it may be for an addict to give up alcohol or drugs.

Therein lies the problem, thinks Kimberly Steele, a bariatric surgeon at The Johns Hopkins Center for Bariatric Surgery. For many, their relationship with food is comparable to that of a drug user’s with drugs—and Steele’s research could potentially back that up.

Although researchers have been exploring this same idea for more than a decade, Steele has the unique advantage of studying actual obese patients through her work as a bariatric surgeon. Her research was catalyzed in 2007 when one of her mentors encouraged her to focus on the link between obesity and the neurotransmitter dopamine, which acts as a hormone.

Often associated with addiction research, dopamine controls the pleasure and reward centers of our brains. Those with lower levels of dopamine have a decreased ability to experience pleasure or satisfaction. For those with a particular vice—be it sex or drugs or something else entirely— many may increase the activity in hopes of recovering the feelings of pleasure that they may have lost.

When starting her own research, Steele found a scientific study in which the researcher took brain scans of obese patients. “He found that as their BMI increased, their dopamine levels decreased,” Steele explains. In other words, those patients demonstrated a decreased ability to experience pleasure from the foods they’d once enjoyed. The researcher surmised that the study could be even more promising if scientists had access to a population of patients who could be measured both as obese and at healthier weights. But that’s tricky, as losing that kind of weight often takes a great deal of time.

Unless, of course, you are bariatric surgery patient who could feasibly lose copious amounts of weight within a year. Using a small grant from the Association of Women Surgeons, Steele began a study that involved taking brain scans of five patients both before and after their weight loss. The results? As patients lost weight, the dopamine levels in their brains increased.

Since then, other researchers have come out with similar studies showing similar results. Next, Steele will begin a study of bariatric patients and their responses to certain tastes and flavors before and after surgery—including alterations in their dopamine levels. Ultimately, Steele says, she hopes all of this work could result in some form of intervention that could aid in treating obese patients. “If we’re able to figure out a link between the brain and food rewards, we could potentially figure out if there’s a pharmacological way to stop obesity,” she says. “Or we can at least find better treatments. If I’m able to predict with a taste test before surgery whether they’re going to have better or worse outcomes, I can help guide them to the best procedure for their success.”