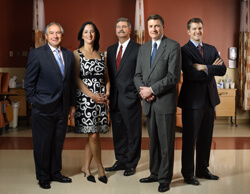 When Sibley Memorial Hospital joined Johns Hopkins Medicine three years ago, the merger, of course, included Sibley’s roster of surgeons. But one team of surgeons, a private practice of general surgeons called Foxhall Surgical Associates, remained on the perimeter of the union—still Sibley-affiliated, but not an official part of the Hopkins family.

Last October, however, that changed, when Foxhall officially merged with Johns Hopkins Medicine. And, if the goal was to increase Hopkins’ reach and exposure in the Washington, D.C., area, it was a wise move: With the addition of Foxhall—together with other surgical specialties such as orthopedics and urology—the hospital’s surgery department performs an estimated 1,000 procedures each month, mostly for metro-area patients. Moreover, says Sibley surgery department chairman Martin Paul, the presence of Hopkins surgeons in that area offers an increased level of convenience for patients who might otherwise have traveled to the Baltimore campus.

“It’s very helpful for Hopkins to have a footprint in this area. Many patients go to Johns Hopkins from Washington, D.C.,” Paul says. “Now, though, we hope we can help some of those patients by offering Hopkins-quality care in this area, or perhaps by offering follow-up care to Hopkins patients so that they don’t have to travel.”

Of course, the decision to merge wasn’t made by Hopkins alone—Foxhall had to agree as well. Fortunately, it was a step that physicians in the practice were ready to take. “We saw the landscape of surgery changing,” Paul explains. “It’s more important for physicians to align with health care systems than ever before. And, of course, being part of Hopkins was a great opportunity for us.”

For now, the physicians—along with the practice’s two physician assistants and 10-person administrative staff—are still housed in their longtime Washington, D.C., office space on New Mexico Avenue. Eventually though, Paul says, they hope to move into a new medical office building adjacent to the Sibley campus. Meanwhile, they hope to add another colorectal and a thoracic surgeon to their team.

“Over the last six months we have gotten to know many of the surgeons at Johns Hopkins,” Paul says. “They’ve all been so helpful in coordinating treatment at Johns Hopkins for patients who require more complex surgery than we can perform at Sibley.”

By all appearances, the union has proven mutually beneficial. The practice brings to Hopkins an extensive list of existing patients, many located in the surrounding region. Meanwhile, for the surgeons themselves, one of the greatest benefits has been the ability to turn over the administrative aspects of medicine to Johns Hopkins Community Physicians, which oversees the business and management of the Foxhall office. Now, surgeons in the practice enjoy concentrating on the practice of medicine instead of the business of it, says founding partner Peter Petrucci. “None of us are trained in the business of medicine, nor did we really enjoy it,” Petrucci says. “We really wanted to focus on taking care of patients and let someone else do the administrative work. That’s a big part of why we transitioned from where we were to where we are.”