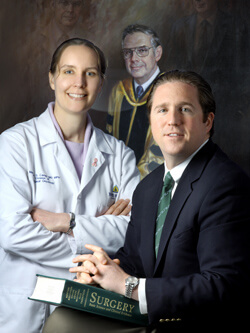 For Melissa Camp, the draw to breast surgery was personal. “My mother was diagnosed with breast cancer when I was in medical school,” she says, “so that influenced my decision to pursue this particular field of surgery.”

That’s not the only reason, though. Camp, a surgical oncologist, also enjoys working with breast cancer patients, as well as the multidisciplinary nature of breast cancer care. In addition to her clinical practice, Camp also conducts outcomes and translational research related to breast cancer. She attended the Johns Hopkins School of Medicine, where she also completed her general surgery residency, followed by a breast surgery fellowship at Massachusetts General Hospital and Brigham and Women’s Hospital in Boston. “I’m thrilled to be back as faculty now,” she says. “I have had amazing training here, and I’ve worked with wonderful residents and faculty.”

Matt Weiss’ decision to specialize in pancreatic, liver and biliary surgery is a direct outgrowth of his residency at The Johns Hopkins Hospital. As a surgical resident, he says, he was able to train under great surgeons with a mastery of complex operations. “As a surgical oncologist, I enjoy both the technical challenges of the operations and the intellectual stimulation of caring for cancer patients,” Weiss says.

Weiss attended Jefferson Medical College in his hometown of Philadelphia. In addition to his Johns Hopkins residency, he completed a dual fellowship in surgical oncology and hepatopancreaticobiliary surgery at Memorial Sloan-Kettering Cancer Center in New York City. Weiss and his wife, Katie, have a 2-year-old son and a 1-year-old daughter. His interests, he says, include “family, surgery, deep-sea fishing and golf—in that order.”