How Islets Stopped the Pain and Returned One Life to Normal 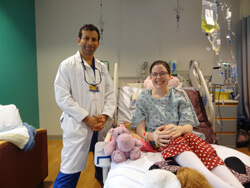 Thanks to the 10-hour procedure performed by Martin Makary, Alison Sarver no longer has to worry about the pain that had once been overpowering.

Alison Sarver had dealt with gastrointestinal problems since she was 18, but it wasn’t until February 2012 that her symptoms became unbearable. And yet none of the multiple physicians she’d seen through the years had been able to offer a diagnosis—some even turned her away, saying there was nothing they could do. Meanwhile, she says, the pain had become excruciating.

Finally, that March, the Pittsburgh, Pa., native got a diagnosis—pancreatitis—and with it, hope for a potential recovery.

It started when her mother learned of The Johns Hopkins Hospital Pancreatitis Center, with a multidisciplinary team of gastroenterologists, pancreatic surgeons, radiologists, pathologists and chronic pain physicians. There, Sarver met with center director Vikesh Singh, who recommended she meet pancreatic surgeon Martin Makary.

Given its highly invasive nature and the associated risks, pancreatic surgery is not to be taken lightly. But by now, Sarver was in constant pain and unable to eat. Her gallbladder had been removed and she relied on a j-tube for sustenance—and she was gradually growing unable to tolerate even that. Adding to the misery, she was unable to work and was often trapped at home, racked with pain. Surgery, Makary says, was her best option if she ever wanted to live pain-free.

Makary recommended a pancreatic islet transplant—a procedure during which the pancreas is removed and clusters of cells called islets, which are responsible for maintaining healthy blood sugar levels and digestion, are isolated and injected into the liver, where they begin to create insulin. With the pancreas gone, so is the pain and discomfort. The drawback is that minus a pancreas, patients are unable to produce necessary digestive enzymes and instead have to take them as supplements with meals. Patients also have an increased risk of diabetes and may eventually have to take insulin.

“The patients we operate on are more than willing to trade acquiring diabetes in hopes of getting rid of chronic pain,” Makary says. “A lot of times there is no other option. They’re completely debilitated.”

Sarver underwent the 10-hour operation in November. Her recovery went smoothly, minus a few weeks spent struggling to reintroduce real food to her diet. Today, she says, her life has completely turned around.

“The year before my surgery was one of the worst of my life,” she explains. “I can’t imagine going through anything like that again. It had been years since I’d been able to eat comfortably. Now, I feel like a normal person. I eat without pain. I can support myself, and I’m able to go out and be social. All these are things I never thought would be possible.”

Sarver credits much of that to Makary. “I love Dr. Makary,” she says. “I wouldn’t have wanted anyone else to do my surgery.”