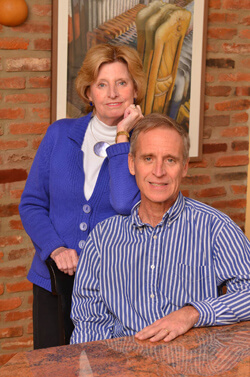 Ever since Janet Bauer Hartman’s unanticipated—and successful—surgery, she and her husband, Andy, have supported Hopkins’ Comprehensive Transplant Center.

Even as she went about her usual routine—teaching school, for instance, or eating dinner with her husband—Janet Bauer Hartman had absolutely no idea that her kidneys were failing her. But in 2000, when she saw her doctor for a different, minor complaint, a blood test revealed an abnormally high level of creatinine, a breakdown product of the kidneys that is often used in detecting renal failure.

Her physician hoped that her condition could be managed through medication, at least for a few years. But soon afterward, Hartman’s creatinine levels spiked, and her doctor said she only had a few months to get a transplant before she’d need to go on dialysis. Fortunately, finding a donor proved comparatively easy: She shared a blood type with her husband, Andy Hartman, who was more than willing to step up to the plate.

Together the couple found themselves in the care of the Johns Hopkins Comprehensive Transplant Center. From there, the experience went seamlessly. Both Hartmans were in and out of the hospital in a relatively short period of time. And, thanks to a vigorous lifestyle and excellent care, they have emerged from the experience happy, healthy and grateful—so much so that they have since become loyal supporters of the Comprehensive Transplant Center (CTC), offering frequent and substantial funds for Montgomery’s research efforts, as well as for other projects around Hopkins Hospital.

To date, through their personal philanthropy and grants from the Charles T. Bauer Foundation, the couple has directed more than $2.4 million to the Department of Surgery, including a recent $2 million commitment from the Foundation to support assistant professor Daniel Warren and his appointment as the Charles T. Bauer Foundation Transplant Biology Laboratory Director in the Johns Hopkins Department of Surgery. The gift will secure his position and support his research for years to come.

The pair is also deeply involved in advocacy work for kidney patients, with Janet serving as a board member of the National Kidney Foundation of Maryland. “We felt so fortunate that Janet never had to go on dialysis,” Andy says. “We want to use the resources we have to help other people avoid dialysis and to simplify the process for potential kidney donors. The CTC is working on projects that have a huge impact on human welfare. It’s so encouraging to know that these capable people are trying to solve problems as the need for more kidney transplants continues to rise."