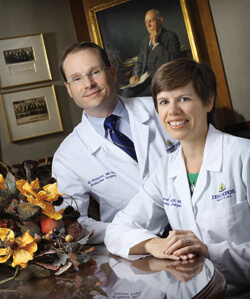 Maggie Arnold’s interest in vascular surgery started as an intern during her general surgery residency at the University of North Carolina. The lure intensified—so much so that she later accepted a vascular surgery fellowship at Mount Sinai Hospital in New York.

Now a new member of Hopkins’ vascular surgery division, Arnold is pursuing her research interests. “I’m very interested in student and resident education and training,” she says. “I would also like to continue working on program development.”

As a medical student at the University of Colorado School of Medicine, Jason Prescott became fascinated with endocrine surgery. “I felt like the field offered the chance to master a wonderfully elegant series of operative techniques,” he says, “and to perform high-impact basic science research.”

A native of Boulder, Colo., Prescott completed his residency at Yale University School of Medicine and an endocrine surgery fellowship at Massachusetts General Hospital. Now, as a member of Hopkins’ endocrine surgery team, he’s setting up a lab under the guidance of Steven Leach, the surgery department’s vice chairman for academic affairs. “I’m certain,” says Prescott, “that there is no more fertile ground for the development of a surgeon-scientist than here at Johns Hopkins.”