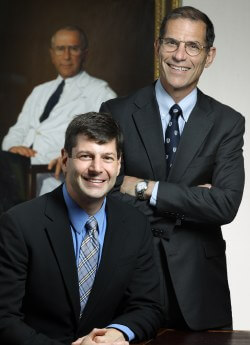 For colorectal surgeon Jonathan Efron, Johns Hopkins represents both a homecoming and the adding of yet another family member to the surgical staff. The Pikesville, Md., native spent the last five years at the Mayo Clinic’s Phoenix campus before being recruited as chief of the Ravitch Division of Gastrointestinal Surgery.

It wasn’t a hard sell.

“My brother David is head of trauma/critical care,” says Efron, “and my dad was the chief of surgery at Sinai Hospital of Baltimore for many years and is on the teaching staff at Hopkins, working with residents who rotated through Sinai.”

Efron says he’s here in part to help grow clinical volumes and the department’s academic presence, including the establishment of the department’s first colorectal fellowship. His research focuses on the use of laparoscopic surgery for colorectal tumors. “With certain surgeries,” he notes, “the survival rate is exactly the same as that of open procedures, and there may be some additional benefits for the patient.”

Cardiothoracic surgeon Glenn Whitman is also glad to be back with some longtime friends: The new director of the cardiac surgical intensive care unit will be working directly with Duke Cameron, a friend of some 40 years (“we were dorm mates,” laughs Whitman), and alongside colleagues Bill Baumgartner, John Conte and Julie Freischlag. The former head of critical care at Philadelphia’s Jefferson College of Medicine came to Hopkins to both teach and, in his words, quantify. “The science of measuring what goes on in an ICU is still young. I’m a measurer, a person who tries to put metrics on everything.”

Citing the patient safety work of MacArthur grant winner Peter Pronovost, Whitman says he sees similar opportunities to improve systems and quality of care. “The culture of this institution is to collect data really well and allow people to utilize it,” he says. “That was a real eye-opener and extremely attractive to me.”