The Cutting Edge - In Good Hands 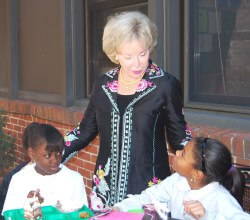 Take a look at any official document from the Maryland State Department of Education and most likely it will bear Superintendent Nancy Grasmick’s signature. Less obvious, however, is the near agony Grasmick experienced while holding the pen and writing her name.

Grasmick had suffered with arthritis in her hands for years, but by 2009 it had grown so debilitating that the simplest tasks like buttoning a blouse, threading a needle or clasping a necklace became impossible. Writing, she says, was excruciating and that was particularly hard: As superintendent of schools, Grasmick’s job entails a lot of writing and signing, not to mention handshaking and typing.

“It was very inhibiting,” she recalls. “I’d have to write, and then stop, take a break, and then write some more. And any time I did anything that required fine motor skills, a small twist to my hand would cause such significant pain.”

As her pain grew, particularly in her dominant right hand, Grasmick’s husband and coworkers urged her to see a doctor. At first, uncertain of what treating the problem entailed, she resisted. “I didn’t want to spend my summer in a cast,” she says. “But then I realized how much worse it was getting. I didn’t want to face another winter feeling so much pain. So I finally decided to do something.”

Grasmick and her husband already had a long-established relationship with The Johns Hopkins Hospital as patients and donors. A few inquiries led her to plastic surgeon Scott Lifchez, who founded and now runs the surgery department’s hand surgery service.

“I didn’t want to face another winter feeling so much pain. So I finally decided to do something.” —Nancy Grasmick

Lifchez provided the shot but explained that it was only a temporary solution. “Sooner or later, for most patients,” he explains, “lesser measures like splints or shots stop working. As bone destruction gets worse from arthritis, it becomes something more than medicine can make comfortable. So it’s expected that the disease is going to progress. The question becomes whether we can remove the source of that pain, which, in this case, is bone rubbing against bone, and then reconstruct the function.”

To that end, Lifchez recommended arthroplastic hand surgery. Performed as an outpatient procedure, the surgery requires taking a small segment of tendon from the forearm and using it to reconstruct the basal joint of the thumb, which was the source of Grasmick’s pain. Afterwards, patients typically wear a splint for four to five weeks while waiting for the incision and tendon to heal. “We’re asking a tendon to serve the same purpose as a bone,” Lifchez says, “so it takes time to repair itself before any stress can be put on it.”

Once her hand was ready, Grasmick was ready to begin physical therapy.

“I’ve had a very rapid recovery,” she says. Moreover, her experience at Hopkins was ideal. “The entire experience was so positive. They made the process so easy for me and now I don’t have any pain. I can’t believe it.”