The Cutting Edge - A Hand-Picked Team 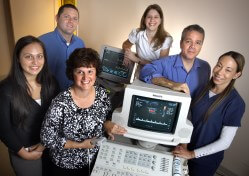 In the business, they call it “the good catch”—that moment when insight, experience and plain gut-level feeling combine to see something that the less-observant eye and ear might miss. And more than 6,000 times a year, the registered vascular technologists at the Vascular Surgery Lab bring that well-honed intuition to the fore, their deftness with vascular sonography often serving as a firstline warning system for the numerous surgeons they assist that something may be amiss with a patient.

Under Technical Director Diana Call, the RVT team continues to grow (they recently added a sixth full-time member) and receive professional recognition, including accreditation through the Intersocietal Commission for the Accreditation of Vascular Laboratories (ICAVL) and membership in the prestigious Society for Vascular Ultrasound. The lab is also part of the training rotation for vascular fellows.

Call credits their success to the compassion and competency of her hand-picked crew; newcomers must prove themselves not only in interviews but also by performing an ultrasound scan. Among the skills Call seeks is what she calls a “light hand,” the ability to maneuver the ultrasound wand against sensitive parts of the body—the neck, the abdomen—without causing the patient discomfort.

“It’s really a natural aptitude and very hard to teach,” Call says. “Some people understand in their head how the scanner works, but put it in their hand and they just can’t do it.”

“Examinations are more challenging here,” Gomez says. “At NOVA, I worked in a lab where the screening was more routine—aortas, carotids, etc. Here you get a broader array of exams: fistulas, mesenteric studies, renals. What’s nice is that we allow new staff to first build confidence with the easier exams. Once they master those, we add new exams until they’re ready for anything,” which includes doing bedside sonograms in settings that include the ICU, ED and OR.

A typical exam is 45 minutes, a time of intense concentration as the sonographer maneuvers both the patient and scanner while paying close attention to the picture on the screen.

“This isn’t like X-ray, MRI or CT, where the patient lies down still and we take pictures,” says Gomez. “We’re looking at moving images and blood flow, but the picture has to be a still that represents the whole story to tell the doctor what’s going on.”

The pictures are immediately read and coded into the computer, an evaluation that often involves two sets of eyes. The images then go to the lab’s medical director, Vascular Surgery Chief Bruce Perler, along with any comments or questions from the sonographer.

Often, those comments draw attention to a potential problem not related to the original study. That, plus seeing how fast a patient can go from being ill to being well, is among the pleasures of the job.

“It’s pretty cool,” says Gomez. “If someone comes in for leg pain, I do the study, find something, then they take the person to the OR and sometimes we’re called to assist there. Then you see the patient afterward, you check them again, and it’s all better.”